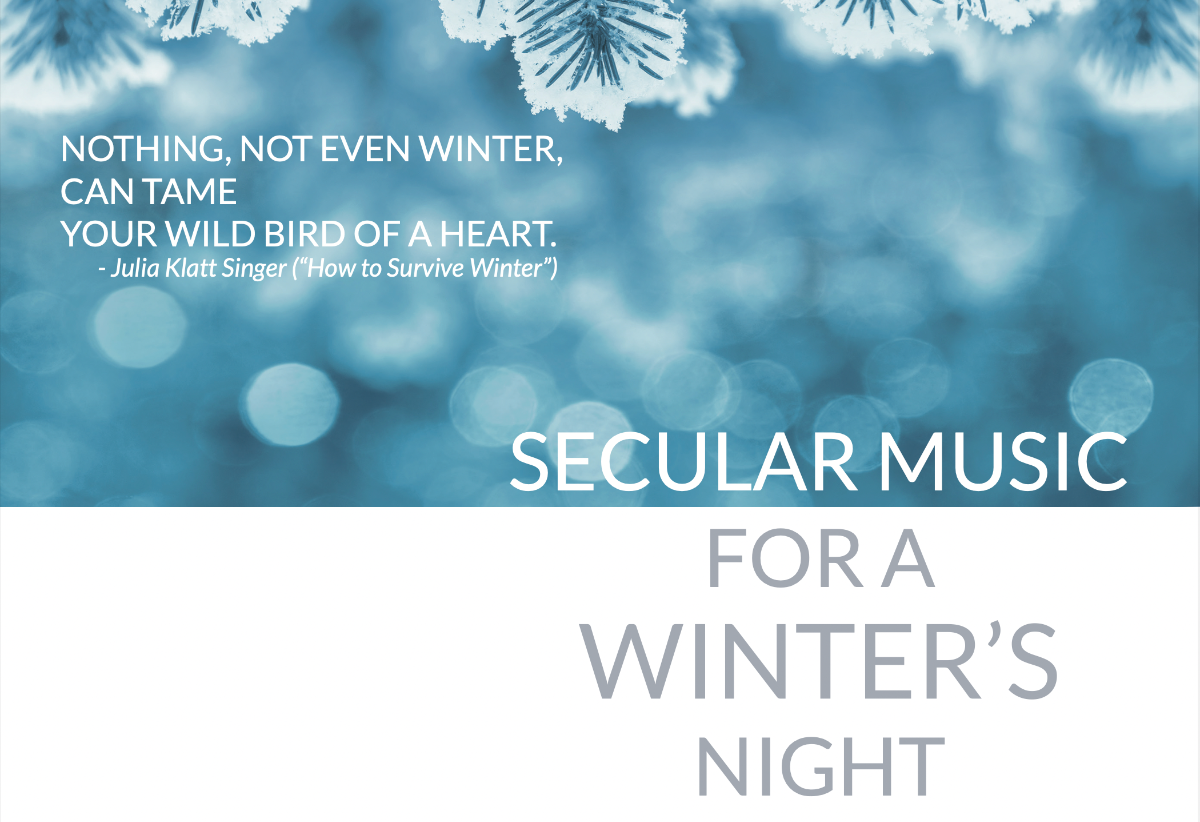 Winter is one of the most evocative and sublime seasons of the year. Even if you live in the American Southwest where winter is a fleeting thought, the concept of winter penetrates deeply into our lives, culturally and even spiritually. For those who endure actual cold winters, the potent power of biting wind and snow take on an even deeper meaning.

Graphite has a broad variety of winter repertoire, from short part songs like Szymko’s “A Winter Ride” to Takach’s choral cycle, The Longest Nights. As you plan your winter programs, dig into Graphite’s offerings and see how they can challenge, enrich, and add a winter sparkle to your concert. 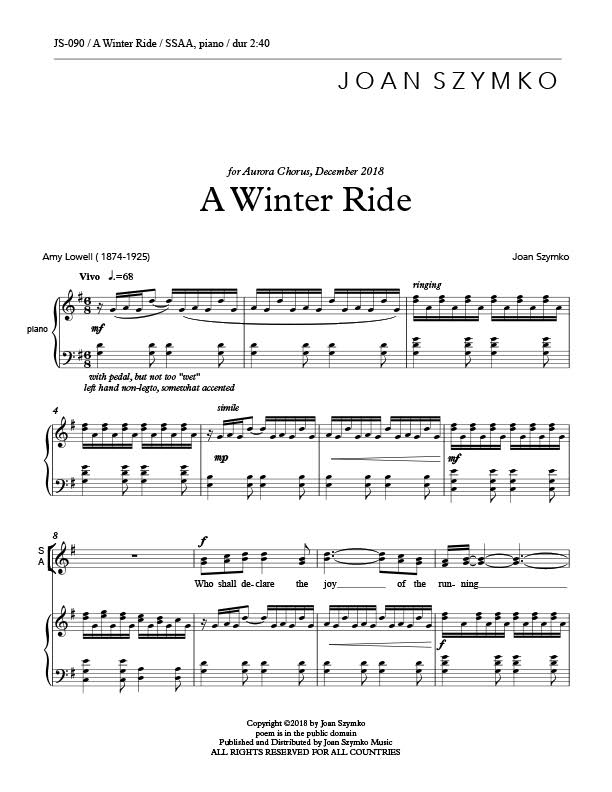 Exciting and exuberant, “A Winter Ride” captures the thrill and exhilaration of galloping on horseback through an open field of snow. 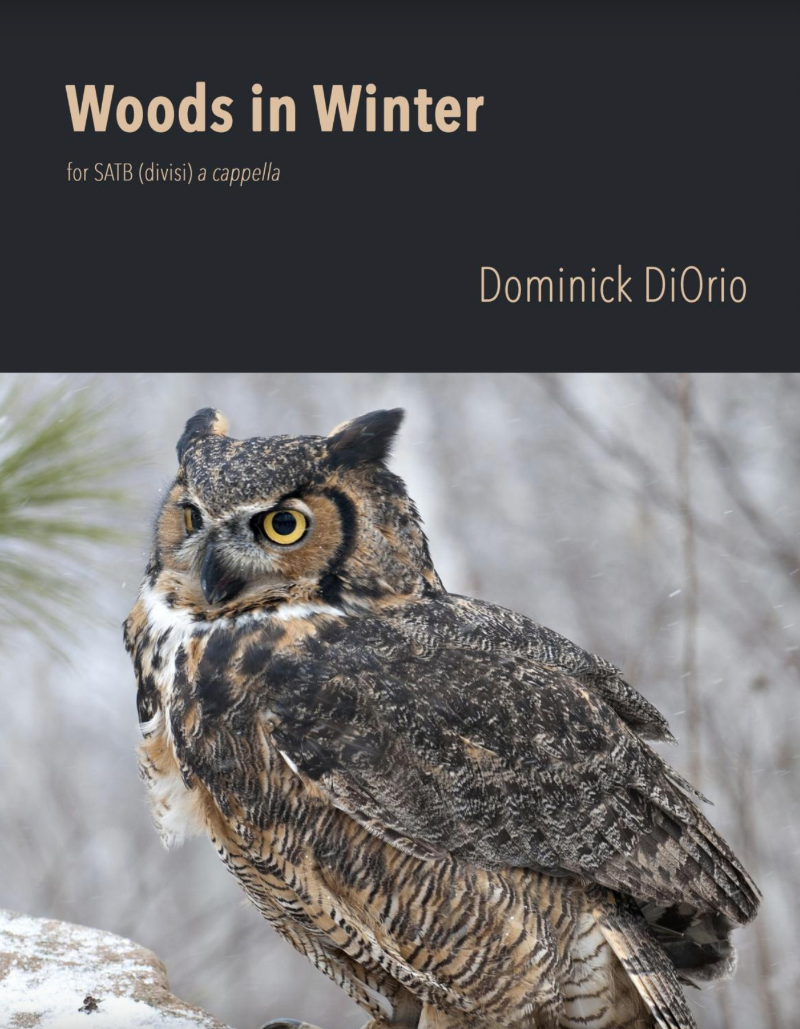 A winter madrigal that sets the poetry of Henry Wadsworth Longfellow, with an opportunity to teach syncopated rhythm and mixed meter. 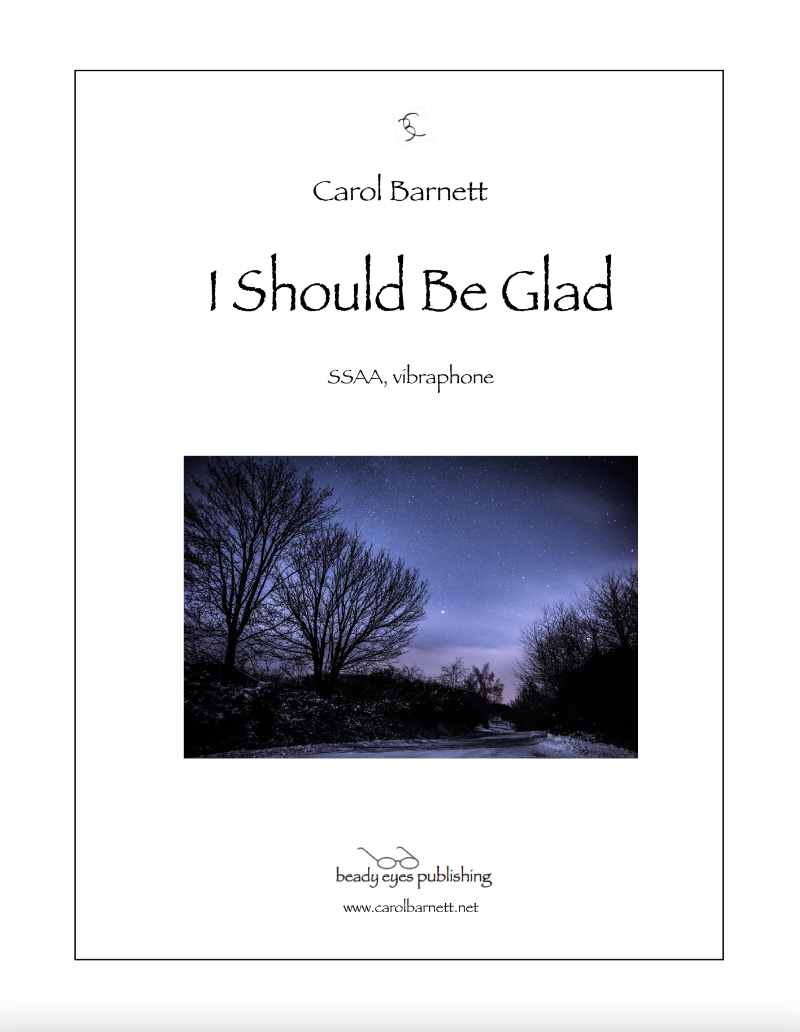 This piece has a fluttering quality to it as if illustrating the dance of falling snow. 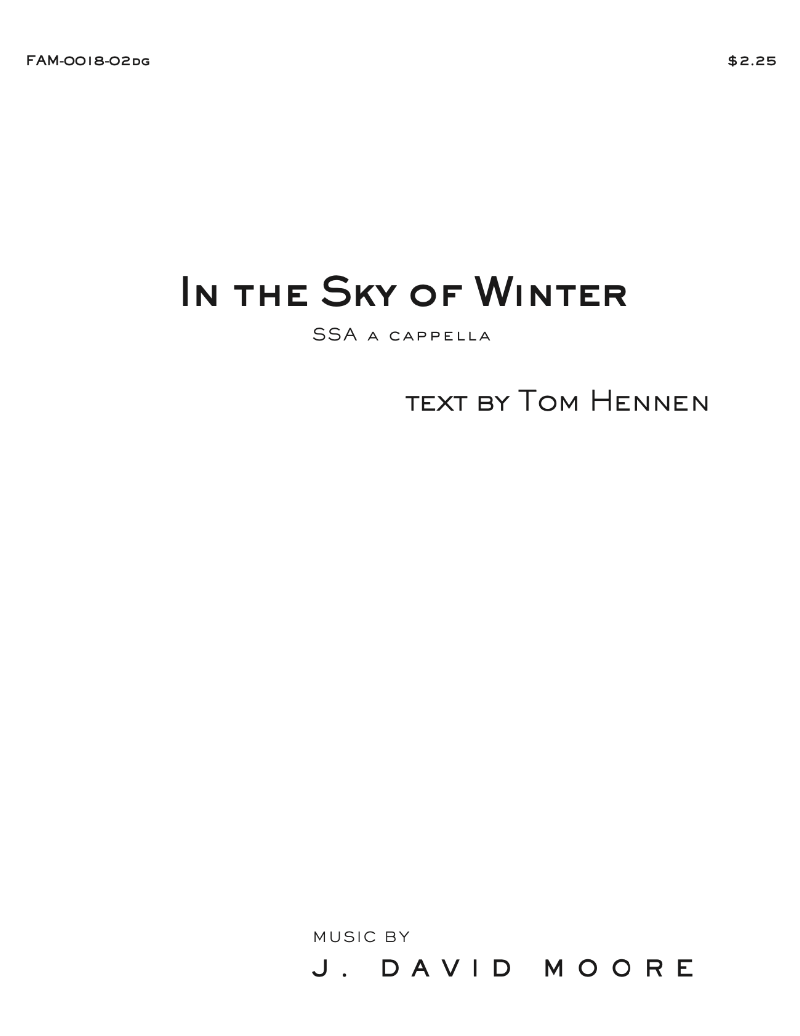 Tom Hennen’s poem “In the Sky of Winter” describes the winter disappearance of flying insects. The sky, “lonesome without its tiny aviators, has filled the air with snowflakes” in this hushed, cool, and intimate work. 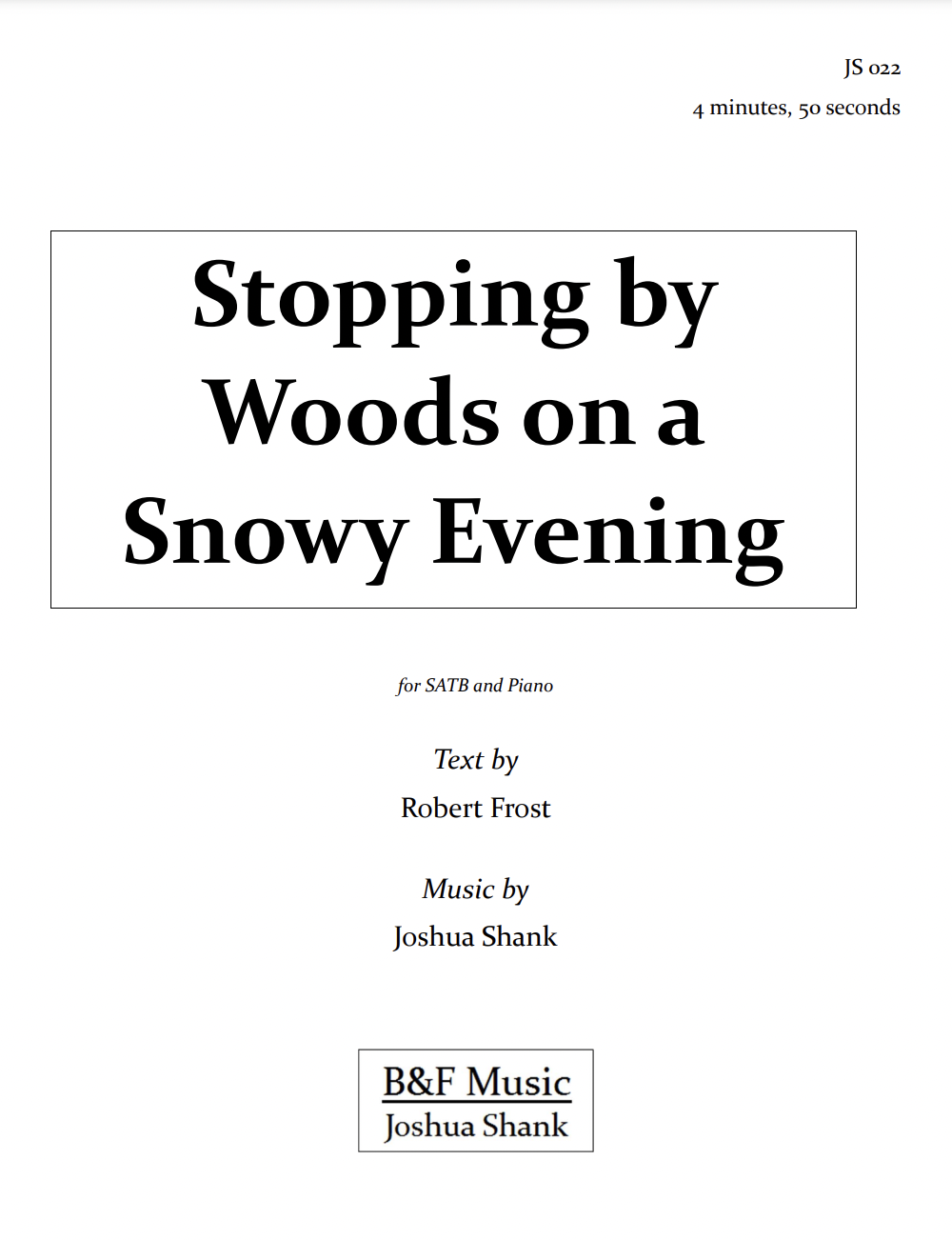 This sensitive and extremely melodic setting by Joshua Shank reminds us of the beauty of the natural world. 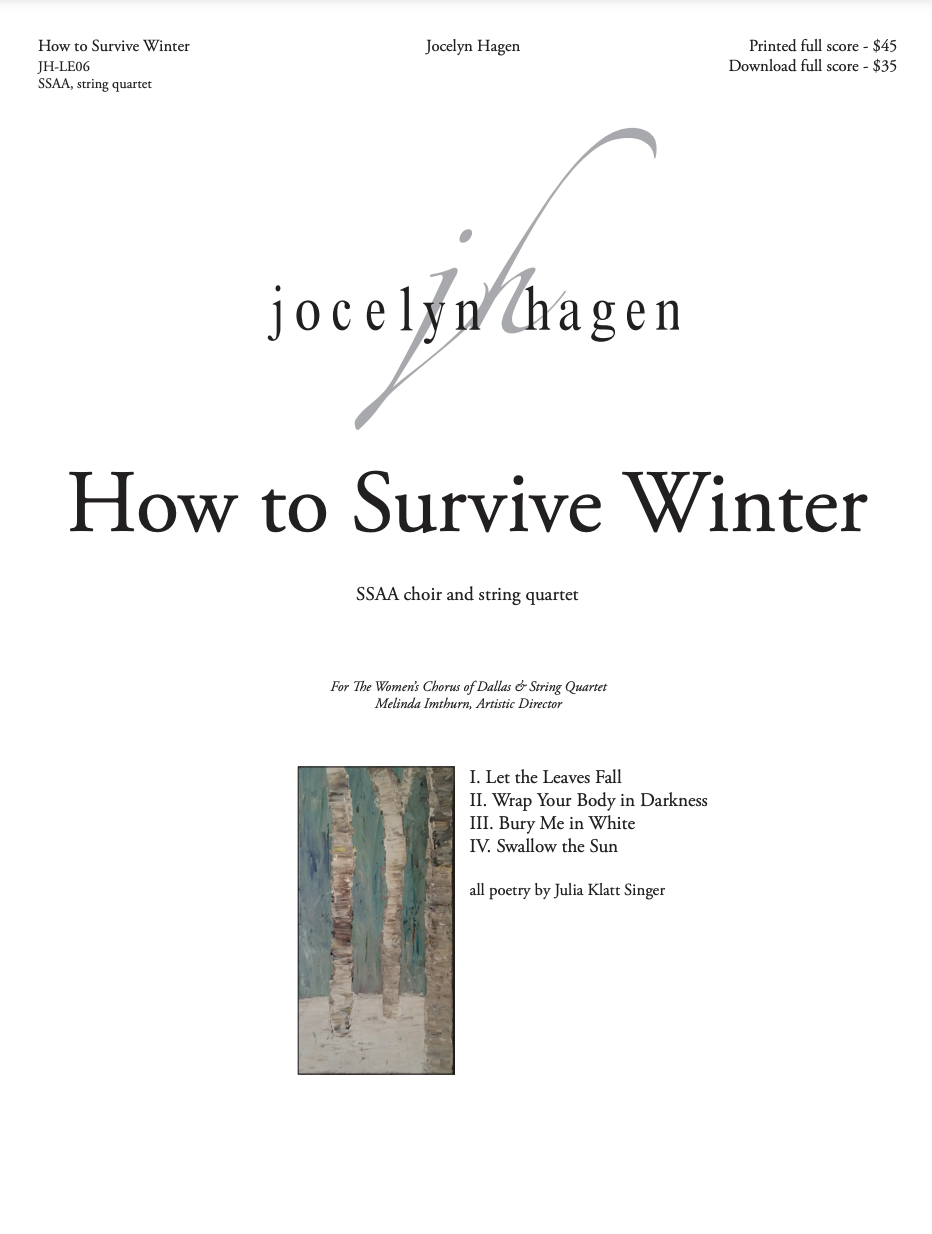 This four-movement work has been called “a welcome departure from the typical winter/holiday music.” Setting winter-themed poetry by Julia Klatt Singer, How to Survive Winter moves from themes of sadness and grief to an uplifting final movement. 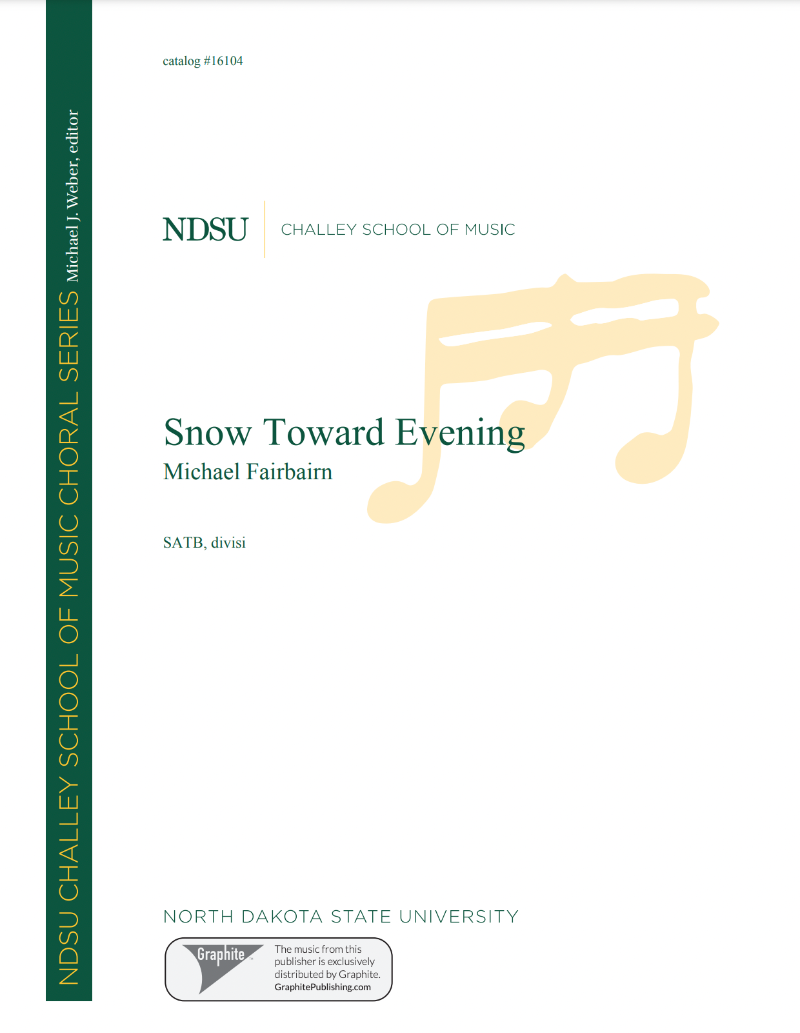 “Snow Toward Evening” slowly layers chords to create a colorful tonality, portraying the serene beauty of a winter’s night in this hauntingly beautiful meditation. 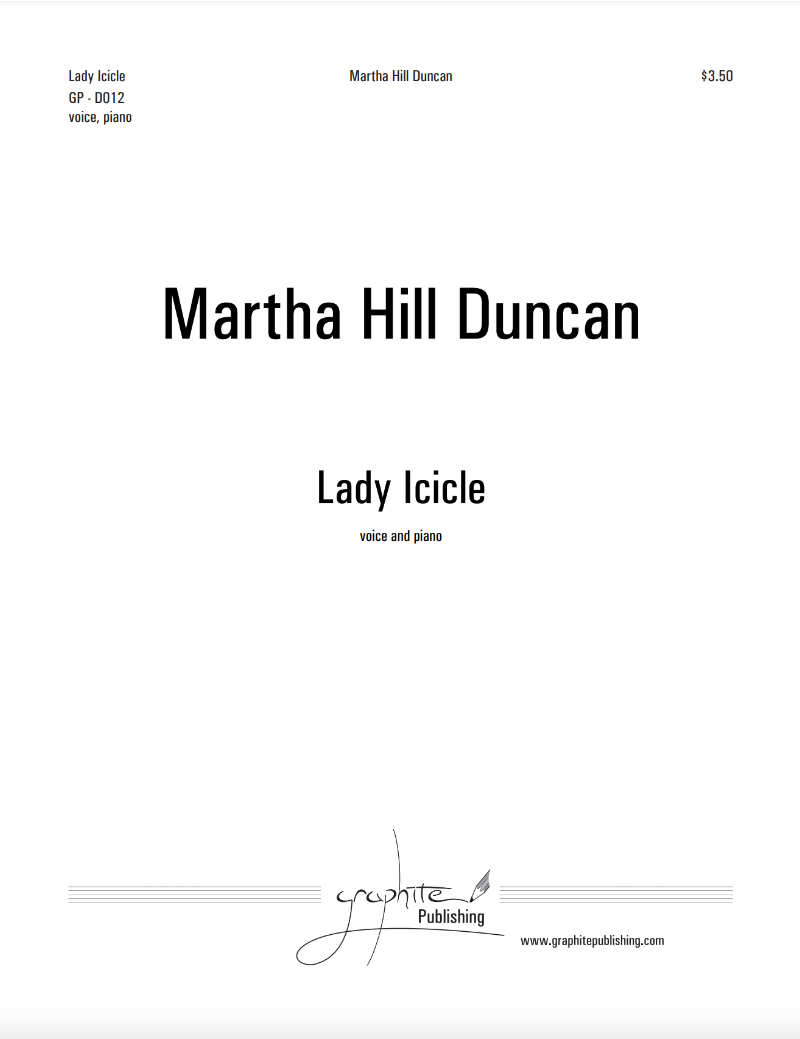 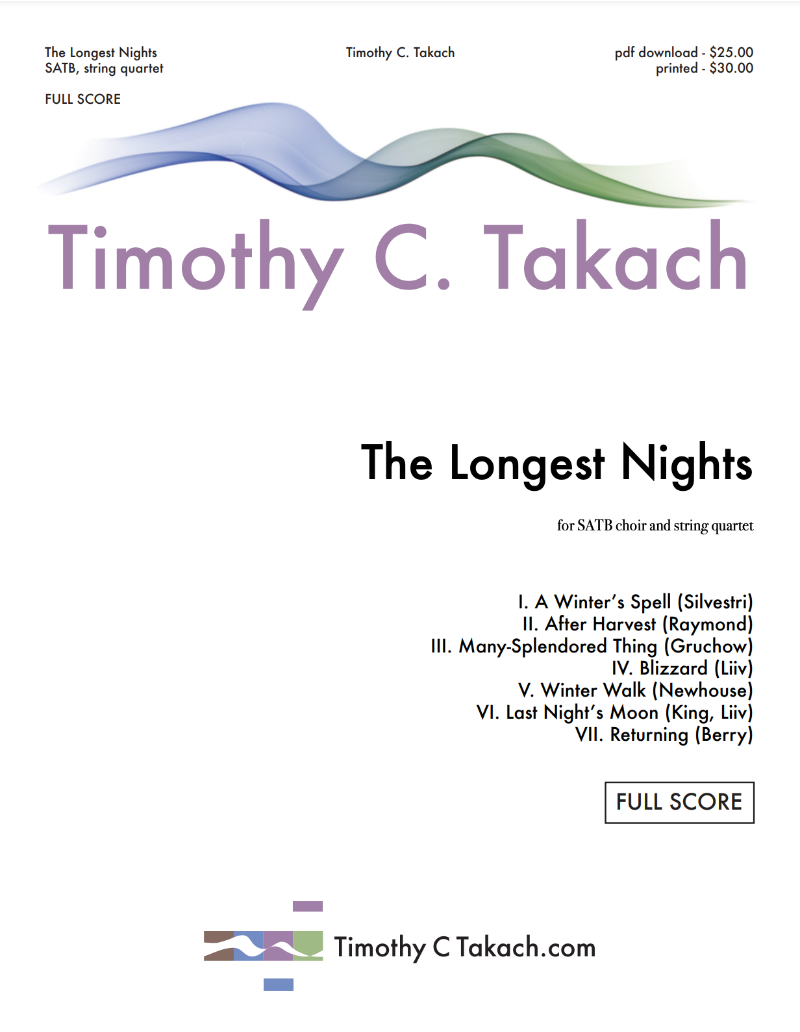 This choral cycle takes us from the approach of winter to the emergence of spring with seven movements that can be excerpted or sung together. Includes one TB and one SA movement, making it perfect for a concert that includes the whole choral program. Need something shorter? “Winter Walk” is a beautiful excerpt from this larger piece.

Joan Szymko (b.1957) is a composer and conductor living and working in Portland, Oregon where she is entering her 23rd season as the Artistic Director of Aurora Chorus. As a frequently commissioned composer with a catalog of over 100 published choral works, her music is performed by ensembles across North America and abroad. Since 2003, her music has been performed at every National Conference of the American Choral Directors Association. In 2010 the ACDA recognized Szymko’s lasting impact on the choral arts in America by selecting her as the recipient of the Raymond W. Brock Memorial Commission. Joan enjoyed a fruitful, decade-long collaboration with Robin Lane and Do Jump! Movement Theater (1994-2004) performing her original music with the company in Portland and touring on Broadway, at the Kennedy Center and at the Geffen Playhouse in LA. She has served on the choral music faculty at Portland State University (2013-15). As a visiting artist, she workshops her music with choirs in a variety of educational settings across the US and most recently, in the Netherlands.

The music of young American composer Dominick DiOrio has been called “a tour de force of inventive thinking and unique colour” (Gramophone) and “[full of] sunny rays of heavenly light” (Opera News). In 2014, he was named the winner of The American Prize in Composition with the judges saying “his depth of vision, mastery of compositional technique, and unique style set him in a category by himself.” DiOrio’s music is widely performed, published, and recorded, having been presented in major venues across the United States as well as in Austria, Canada, China, Hong Kong, Korea, Sweden, and the UK. His works are published with Boosey & Hawkes, Carl Fischer, G. Schirmer, Oxford, and others; and they can be heard on albums released with Divergence, MSR Classics, Naxos of America / Seraphic Fire Media, and New Dynamic Records.

Carol Barnett’s music has been called audacious and engaging. Her varied catalog includes works for solo voice, piano, chorus, diverse chamber ensembles, orchestra, and wind ensemble. She was awarded the 2003 Nancy Van de Vate International Prize for Opera for her chamber opera, Snow, and her music theater work Meeting at Seneca Falls was featured at the 2006 Diversity Festival in Red Wing, MN. The World Beloved: A Bluegrass Mass, commissioned in 2006 by VocalEssence and written with Marisha Chamberlain, had its Carnegie Hall debut in February 2013 and has become a favorite across the country. Recent works include Will’s Ladies, a Shakespeare cycle for mezzo-soprano Clara Osowski and the Metropolitan Symphony Orchestra; A Monument to Adam, for the Cantata Singers; and Summer 2020, for the 2022 Biennial National Convention of the American Guild of Organists.

J. David Moore is a composer, arranger, conductor, teacher, and Southerner who has lived in the Upper Midwest for most of his life. His music has been called “endlessly inventive,” “glorious…haunting…breathtaking,” and “joyous…wild and elemental.” He publishes through his company Fresh Ayre Music, and is the founder and conductor of The First Readings Project, a chamber choir that acts as a resource for composers in the development and promotion of new work. He lives with his wife Anna in Minneapolis, where he bakes bread, drinks tea, and is distracted by beauty.

Joshua Shank’s works have been widely performed by educational and professional ensembles alike. His works often feature the human voice, and focus on social justice or the amplification of marginalized communities. His work, “capable of anything,” celebrated the passage of marriage equality in the United States, and his oratorio, Magnificat for the Mothers of the Plaza de Mayo, tells the story of the movement of Argentine mothers who campaigned for their children who had been “disappeared” by the military junta that formally governed the nation. His work “Primavera en silencio” is based on American conservationist Rachel Carson’s landmark writing on climate change, and his “alleluia (from quarantine)” was commissioned by a consortium of ensembles from around the United States in order to raise money for gigging musicians whose livelihoods have been decimated by the COVID-19 pandemic.

Jocelyn Hagen composes music that has been described as “simply magical” (Fanfare Magazine) and “dramatic and deeply moving” (Star Tribune, Minneapolis/St. Paul). Her first forays into composition were via songwriting, and this is very evident in her work. The majority of her compositional output is for the voice: solo, chamber and choral. In 2015, Test Pilot, her dance opera collaboration with choreographer Penelope Freeh, received a Sage Award for “Outstanding Design,” and the panel declared the work “a tour de force of originality.” Her melodic music is rhythmically driven, texturally complex, and has recently become more experimental in nature. In 2013 she released an EP entitled MASHUP, in which she performs Debussy’s “Doctor Gradus Ad Parnassum” while singing Ed Sheeran’s “The A Team.” Her commissions include Conspirare, The Minnesota Orchestra, the American Choral Directors Associations of Minnesota, Georgia, Connecticut and Texas, the North Dakota Music Teacher’s Association, Cantus, the Boston Brass, The Metropolitan Symphony, and The Houston Chamber Choir, among many others. She is currently an artist-in-residence at North Dakota State University and regularly composes for their ensembles. For ten years she was a composer-in-residence for the professional choir she also sang in: The Singers, under the direction of Matthew Culloton. Her music has been performed all over the world, including Carnegie Hall and Lincoln Center in New York City. Her work is independently published through JH Music, as well as Graphite Publishing, G. Schirmer, Santa Barbara Music Publishing, Fred Bock Music Publishing, and Boosey and Hawkes.

Martha Hill Duncan received a diploma in Vocal Music in the first graduating class of the Houston High School for Performing and Visual Arts and a Bachelors of Music in Composition from the University of Texas at Austin. Her composition teachers have included Donald Grantham, Robert Palmer and Sam Dolin; her piano teachers have included Gregory Allen, Danielle Martin, Errol Haun and Trudi Borden. Her ongoing interest in vocal music and recognition of her adopted country, Canada, has culminated in a cycle of songs for voice and piano entitled Singing From the Northland: A Celebration of Canadian Poetry in Song. Three of these songs, “Severance,” “Grey Rocks and Greyer Seas” and “Rainfall” were chosen as finalists and performed in the 2005 Diana Barnhart American Song Competition in Wayne, PA. As director of the Kingston, Ontario women’s choir She Sings!, she has also produced several works for treble choir, many based on native Canadian texts, including “Song of the Stars,” “Lady Icicle” and “Lullaby of the Iroquois.”

Jonathan Campbell received his B.A. from Luther College in 1998, a Master of Sacred Music degree from Luther Seminary, St. Paul, Minnesota in 2002, and a Doctor of Musical Arts in choral conducting in 2015 at North Dakota State University. Jon is founder and artistic director of the Minnesota Renaissance Choir, and is currently Director of Music at Zion Lutheran Church, Anoka, Minnesota. His compositions are available from leading publishers.