You are here: Home / Announcements / NEW! Hawaiian Music And More From Rose Publications! 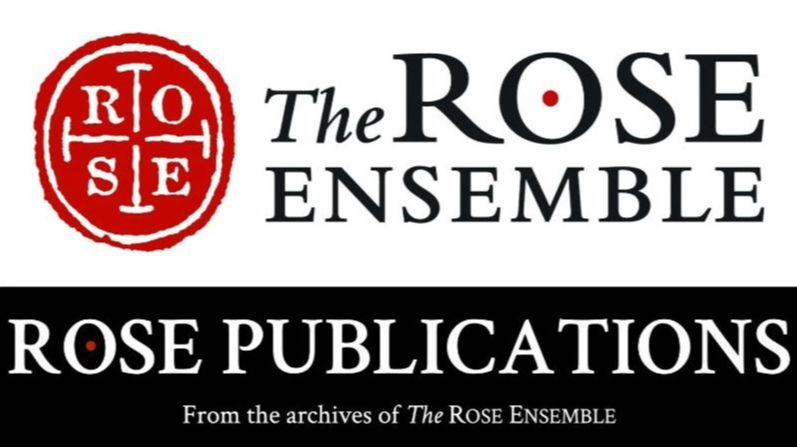 Graphite is proud to announce the addition of Rose Publications to our already rich catalog. Rose Publications is a collection of scores recorded by the acclaimed Rose Ensemble. Featured in this series are 30 unique arrangements of music from Hawaii as well as 19th-century “shape note” hymnody.

Jordan Sramek, former Artistic Director of the Rose Ensemble and editor for this series, explains: “I wanted to make sure that choral musicians not interested in historical hymns or art songs could still program Hawaiian vocal music. The paniolo (Hawaiian cowboy) songs, although challenging, are just so much fun…and they reveal fascinating details of political, agricultural, and immigration history in the Hawaiian Islands. We’ve also included in the volume Linda Kachelmeier’s swaying arrangement of “Liliʻ u e” (for women’s voices), which is lush and gentle, and a wonderful introduction to singing in the Hawaiian language.

Score requests over the years have been largely related to The Rose Ensemble’s interpretation of Shaker hymns and Southern Harmony melodies. There is so much more to these genres than the iconic “Simple Gifts” or a throat-bleeding performance of a song from “The Sacred Harp,” yet I am amazed by how limited the published options are. So, I’m particularly excited to finally make available our arrangements of placid Shaker gems like “Give Good Gifts” and “Harps of Welcome,” as well as the full-voice, shape-note selections “Jordan’s Shore” and “Star in the East.”

These offerings of music from Hawaii and American hymnody are only the beginning of a choral series that will continue to develop. Soon to come are medieval Czech carols, Central and South American, as well as a volume dedicated to St. Francis of Assisi. 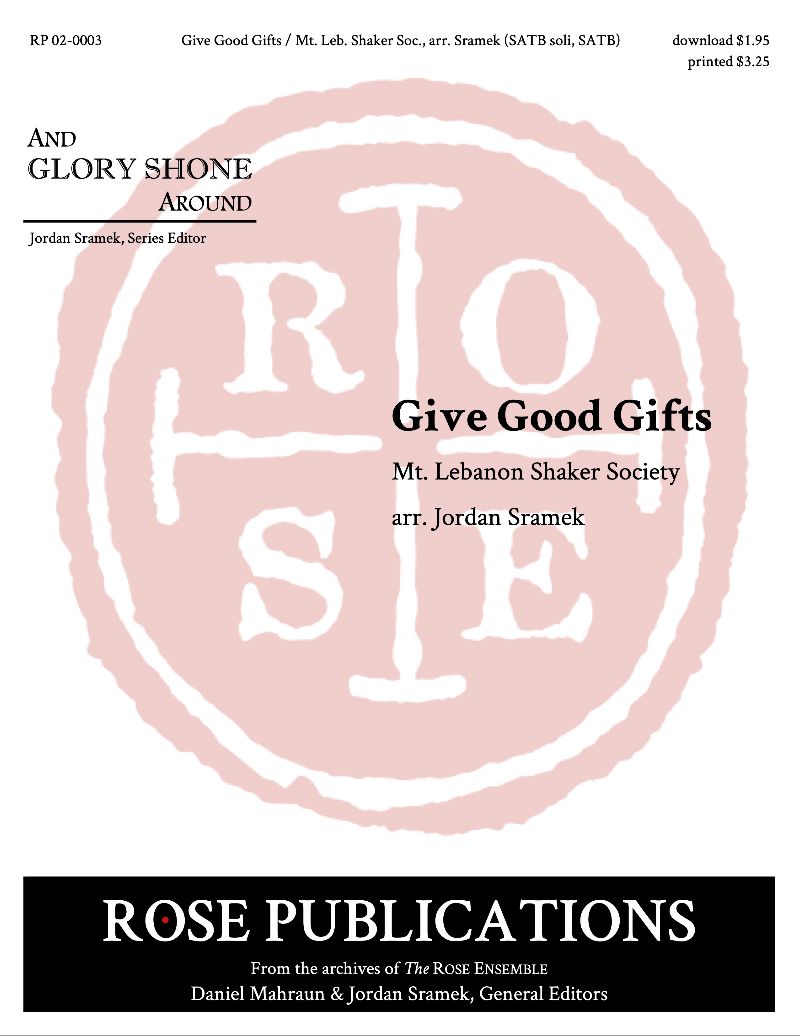 With its uplifting themes of sharing and community, this piece grows in confidence with antiphonal singing between a quartet and full chorus. The score contains source information, historical context, editorial notes, and performance suggestions. 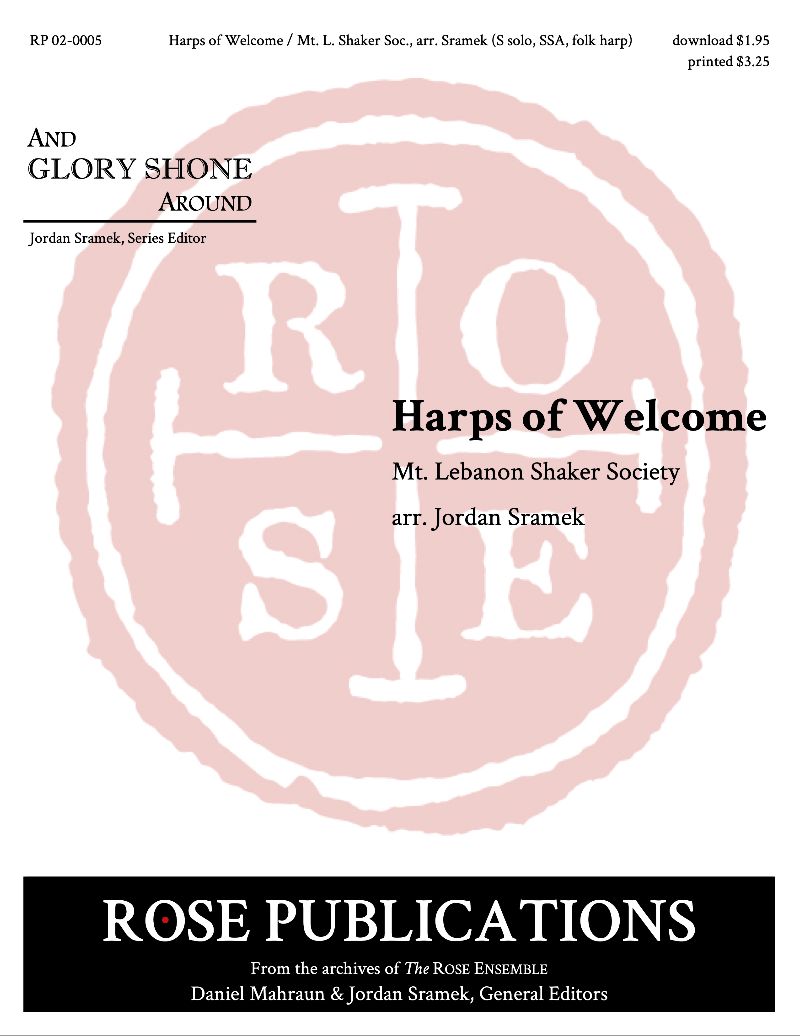 This Shaker hymn, notable for its melodic range, opens with a featured solo that may also serve as a good exercise in unison singing. The harp part may, alternatively, be played by guitar. The score contains source information, historical context, editorial notes, and performance suggestions. 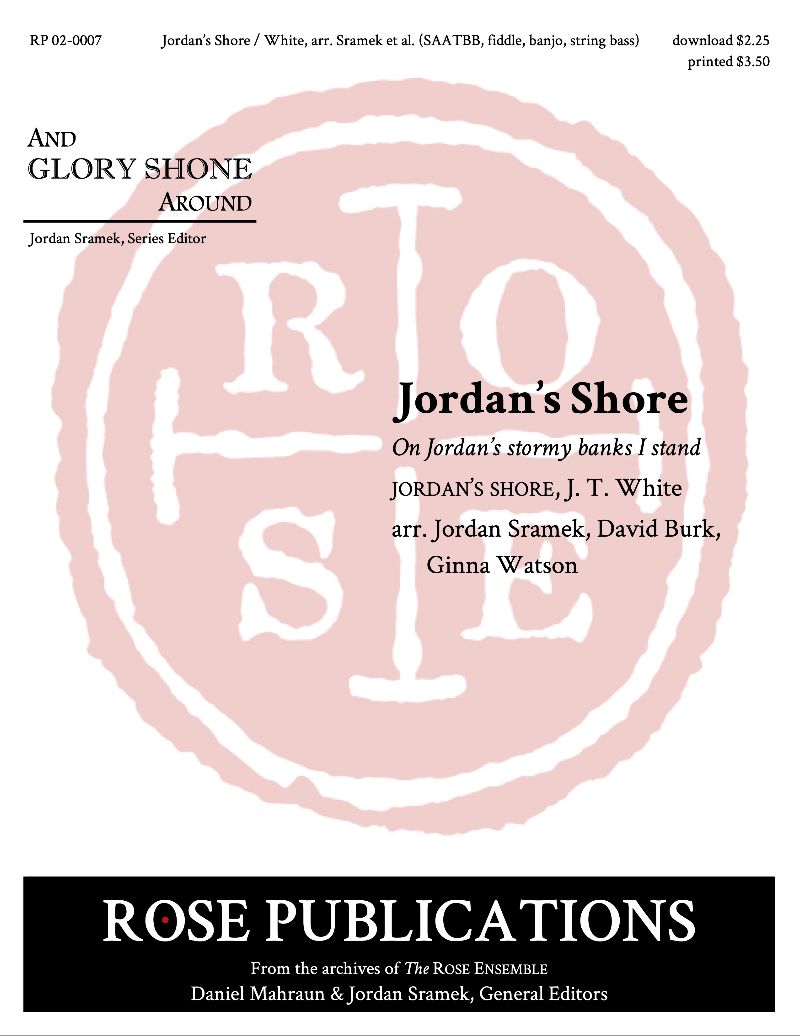 Themes of hope and longing are underscored by shifting and expanding voicing through this shape-note hymn. The Rose Ensemble’s recorded performance utilizes a gut-strung, gourd banjo. Such a subtle tone may serve a small ensemble; a modern, steel-strung banjo may balance better with a larger choir. The score contains source information, historical context, editorial notes, and performance suggestions. 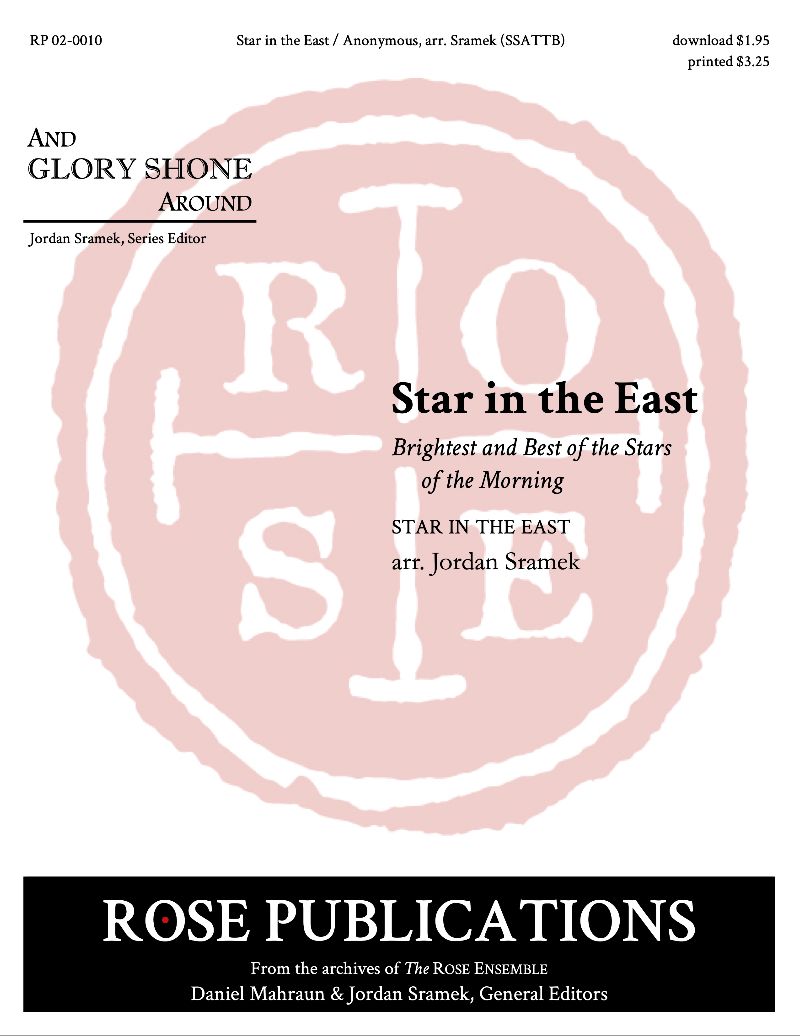 Star in the East

This thrilling showstopper sets the familiar text “Brightest and Best,” making it appropriate for Christmas or Epiphany. (The Rose Ensemble used it year-round as an encore.) The score contains source information, historical context, editorial notes, and performance suggestions. 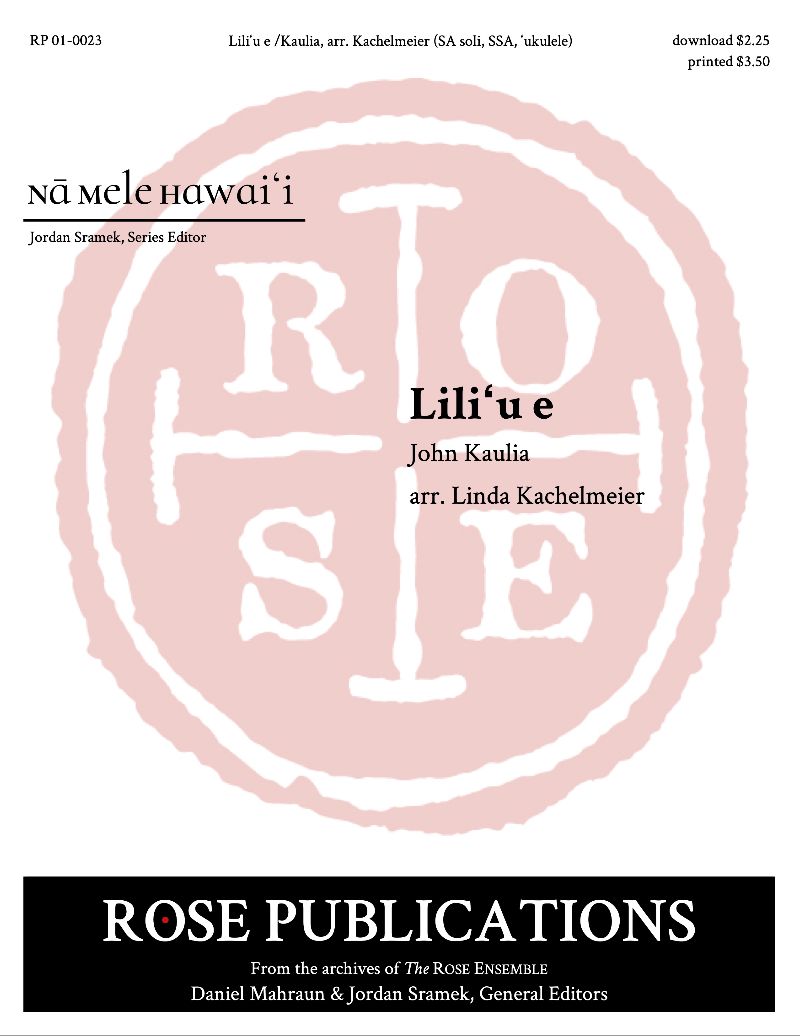 Akoni Kaoʻo, known as the “race horse of Waialua” for his success as a distance runner, was a renowned kumu hula and had served in the army during the reigns of Kalākaua and Liliʻuokalani. With this name chant, he expressed his loyalty to the Queen. A separate ʻukulele lead sheet is included. The score contains source information, historical context, editorial notes, performance suggestions, and a translation above the staff. A brief Hawaiian diction guide is included. 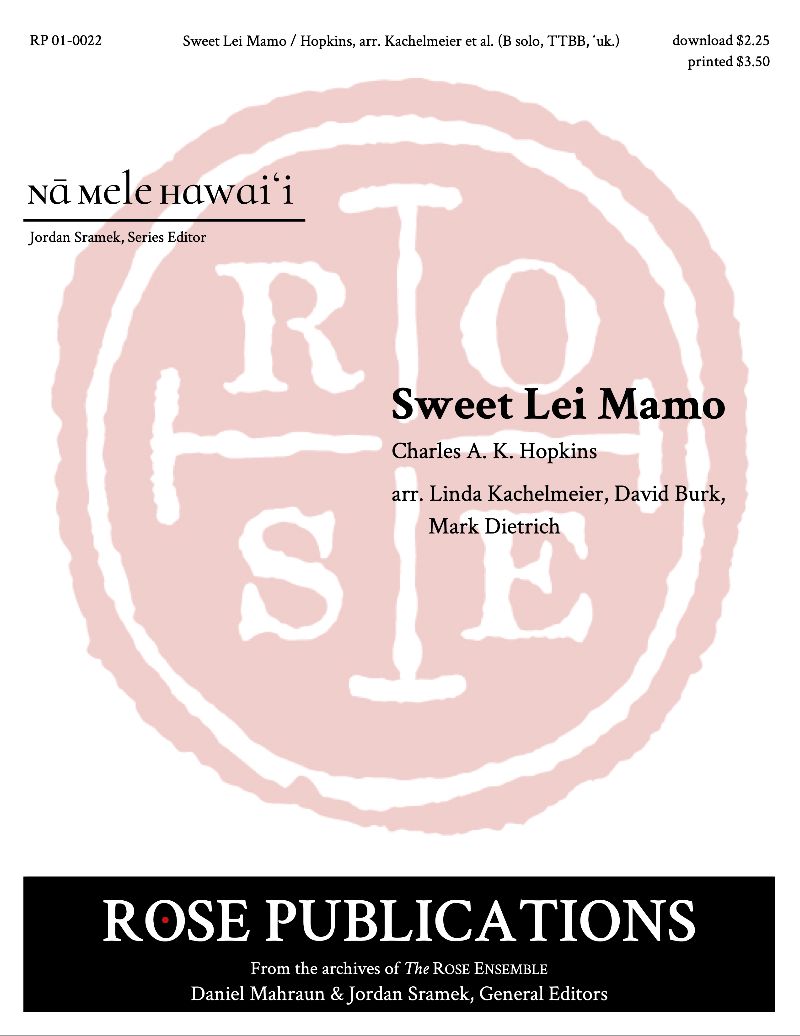 This rare opportunity for a low bass soloist builds to a final verse in close TB harmony. Given the laid-back and wistful nature of this song, it may be better suited to a smaller ensemble, rather than a full choir. A separate ʻukulele part is included. The score contains source information, historical context, editorial notes, performance suggestions, and a translation above the staff. A brief Hawaiian diction guide is included. 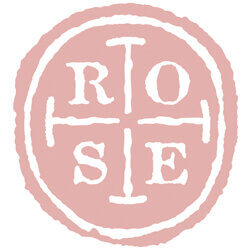 Rose Publications was created to advance the programmatic legacy of The Rose Ensemble (1996-2021), which achieved an international reputation for uniting virtuosic vocal artistry with scholarly research, and connecting audiences to compelling stories of human history, culture, and spirituality from around the world. Rose Publications is led by Rose Ensemble Founder/Artistic Director, Jordan Sramek, along with Co-General Editor Daniel Mahraun, former Rose Ensemble musician and current artistic director of the Seattle Bach Choir.

Rose Publications’ debut offerings are the And Glory Shone Around Series (18th- and 19th-century Southern Harmony and Shaker hymns) and the Nā Mele Hawaiʻi Series (19th- and 20th-century Hawaiian hymnody, art music, and ranching songs). A creative variety of choral music will continue in future series, including historical and new works from Slavic cultures, Central and South American regions, a volume dedicated to St. Francis of Assisi, and more.

On This Day
December 9

“A Life for the Tsar,” a patriotic opera by Mikhail Glinka, was performed for the opening of the rebuilt Bolshoi Theatre in St. Petersburg on this day in 1836.