You are here: Home / Announcements / It’s Christmas in July!

One of my favorite Christmas carols is “What Cheer? Good Cheer!” by Peter Warlock. This carol reminds me of our mission as choral musicians: during the holidays we bring “cheer” to our audiences. We are ambassadors for the goodness of the human spirit. Below are six Christmas/holiday selections that will bring “good cheer” to your choir, no matter the skill level.

You’ll also notice a variety of perspectives in this holiday music to further enrich this important time of year. 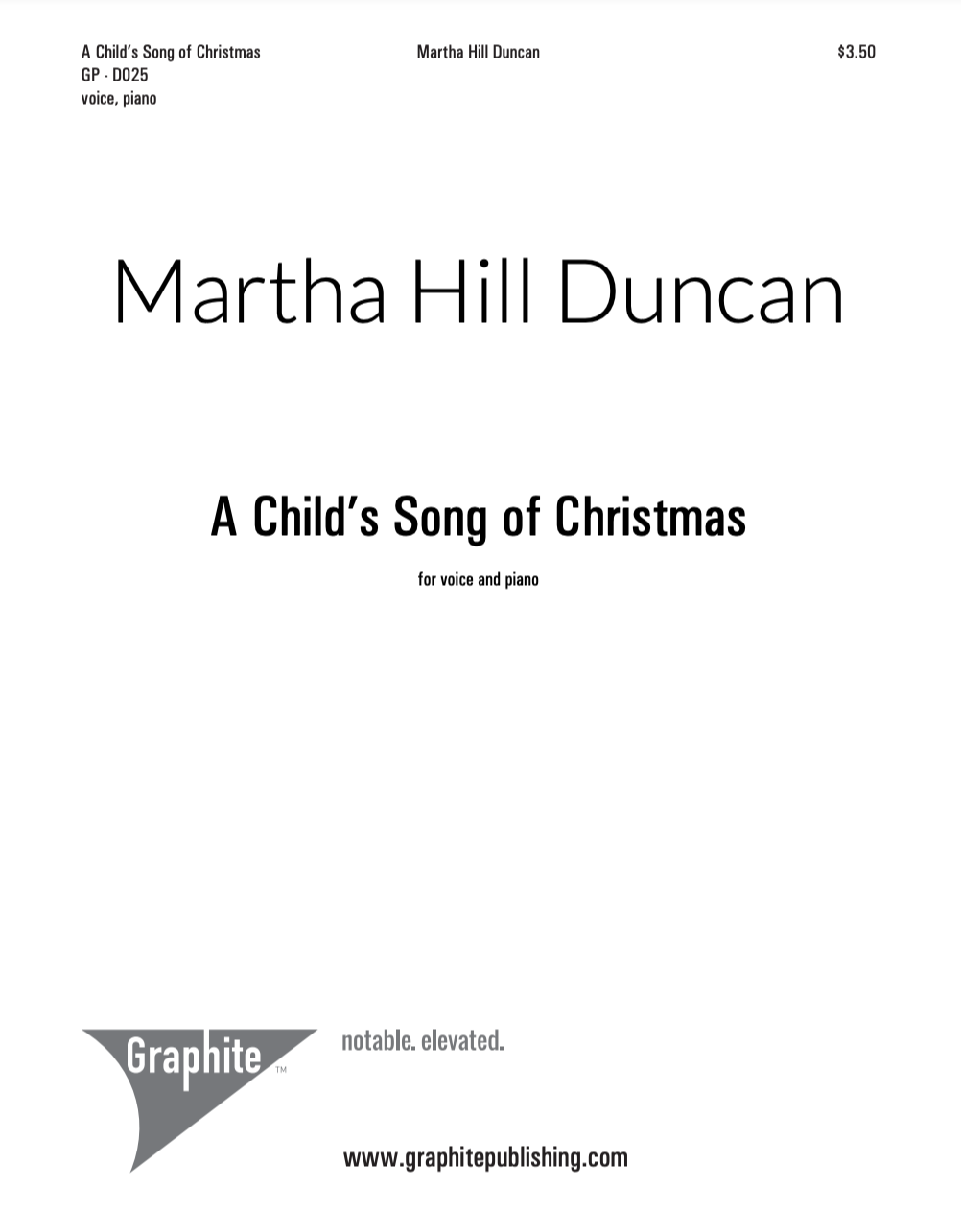 This delightful song by Martha Hill Duncan is a great fit for a Christmas performance (and easy to learn quickly!). The melodic repetition makes it a great teaching tool for younger voices and the poetry beautifully marries the image of the first Christmas morning with today. 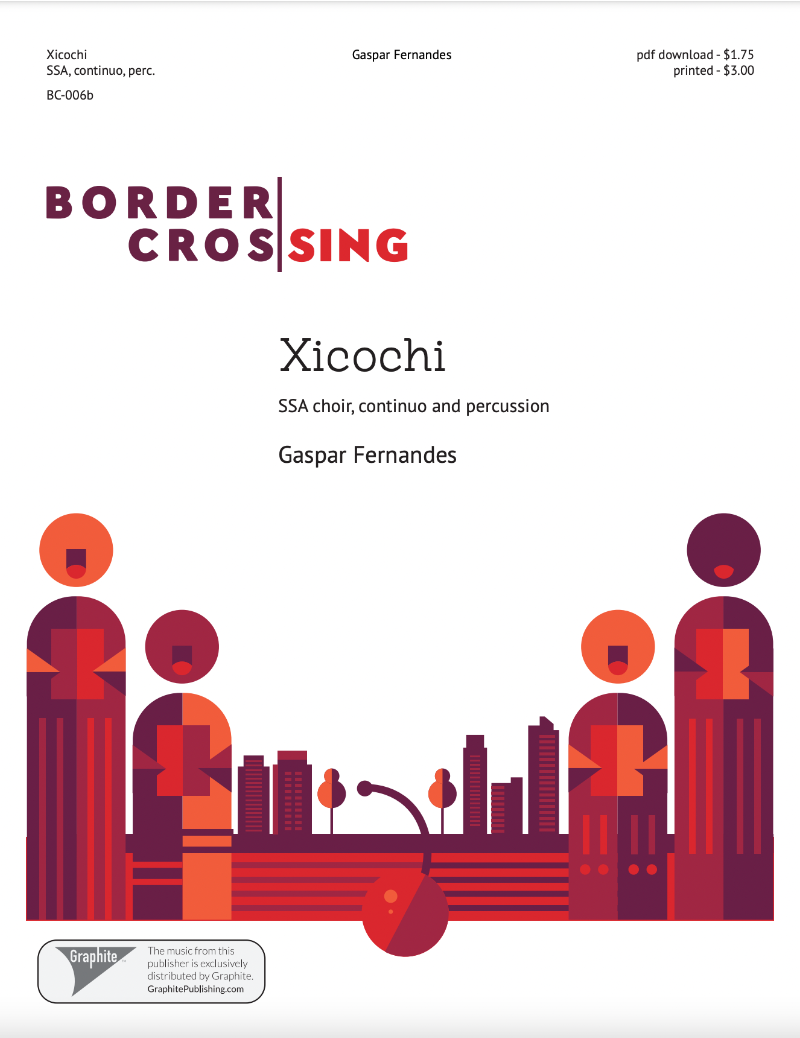 “Xicochi,” composed in the early 1600s, has become a standard of choral Christmas repertoire in Mexico. Its calm, rocking rhythm vividly paint a picture of a mother rocking a child to sleep. This performing edition includes historical context, editorial markings, chord progressions, and incorporates performance practice from Mexican folk traditions that bring this work alive in a way that is rarely seen outside of communities in central Mexico. 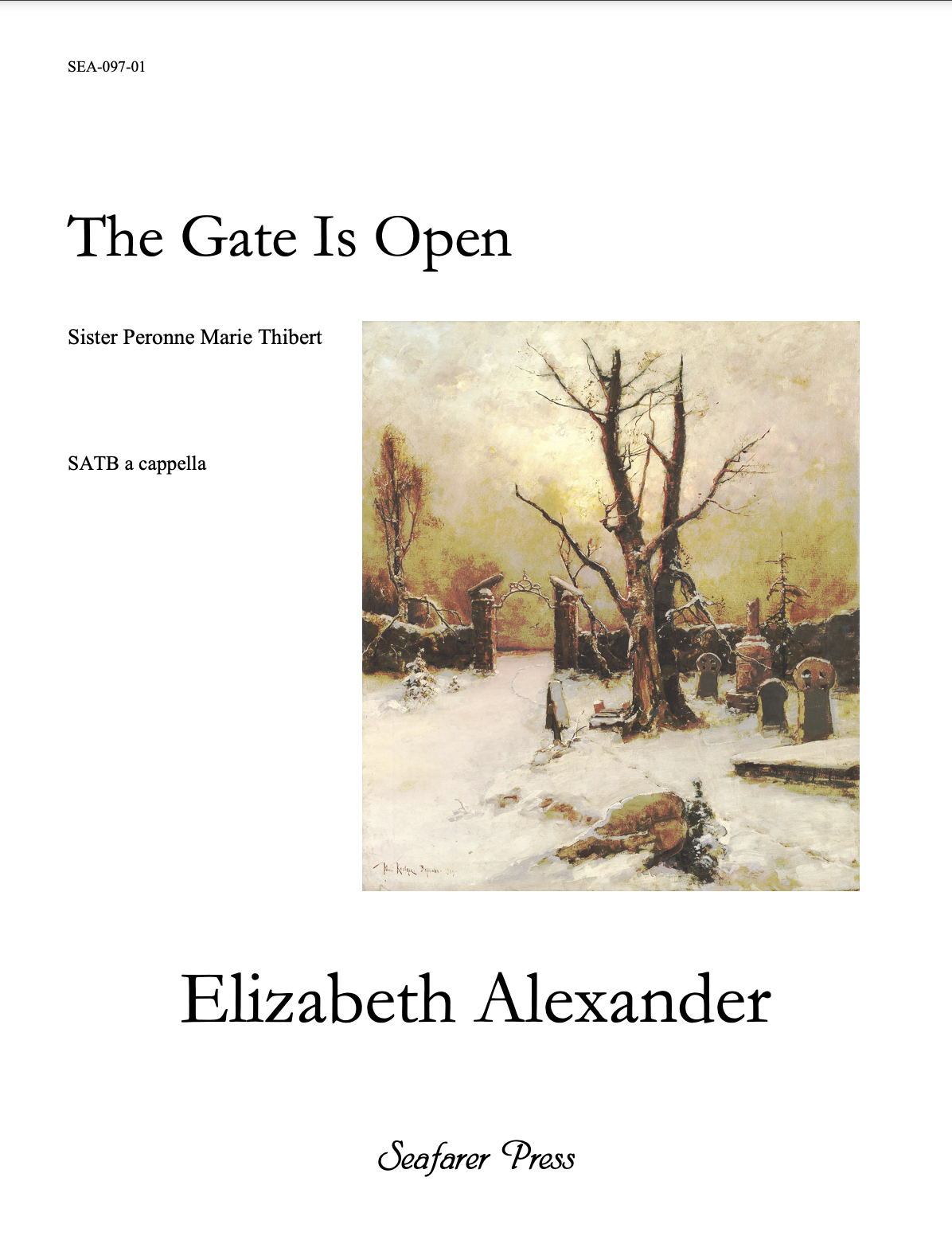 The Gate is Open
Elizabeth Alexander
SATB a cappella
Difficulty:

Elizabeth Alexander’s “The Gate is Open” offers the contemplative listener a gentle unfolding of stillness and mystery. Its three symbols – the gate, the woods, and the Star – are an exquisite invitation to enter a place dark and deep, found “somewhere beyond on the other side of fear, of hopelessness.” A powerful addition to winter, solstice, or holiday concerts, from its haunting opening melody through its final crystalline chords. 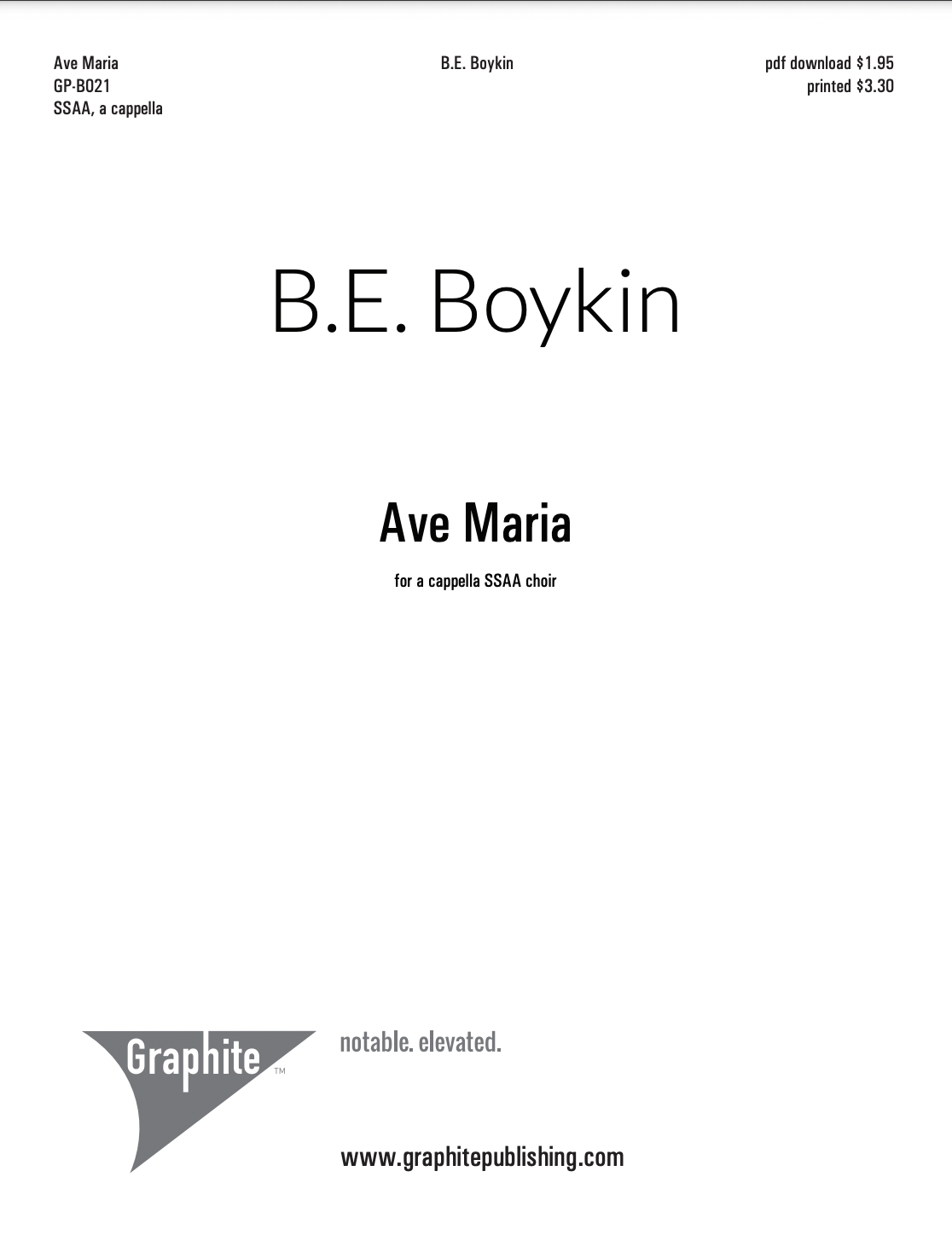 Boykin’s “Ave Maria” is like a dramatic chorale.  She explores the depths and heights of the treble voices, building to a glorious and ecstatic climax. Dramatic dynamics and sincere expression result in a powerful and moving composition. 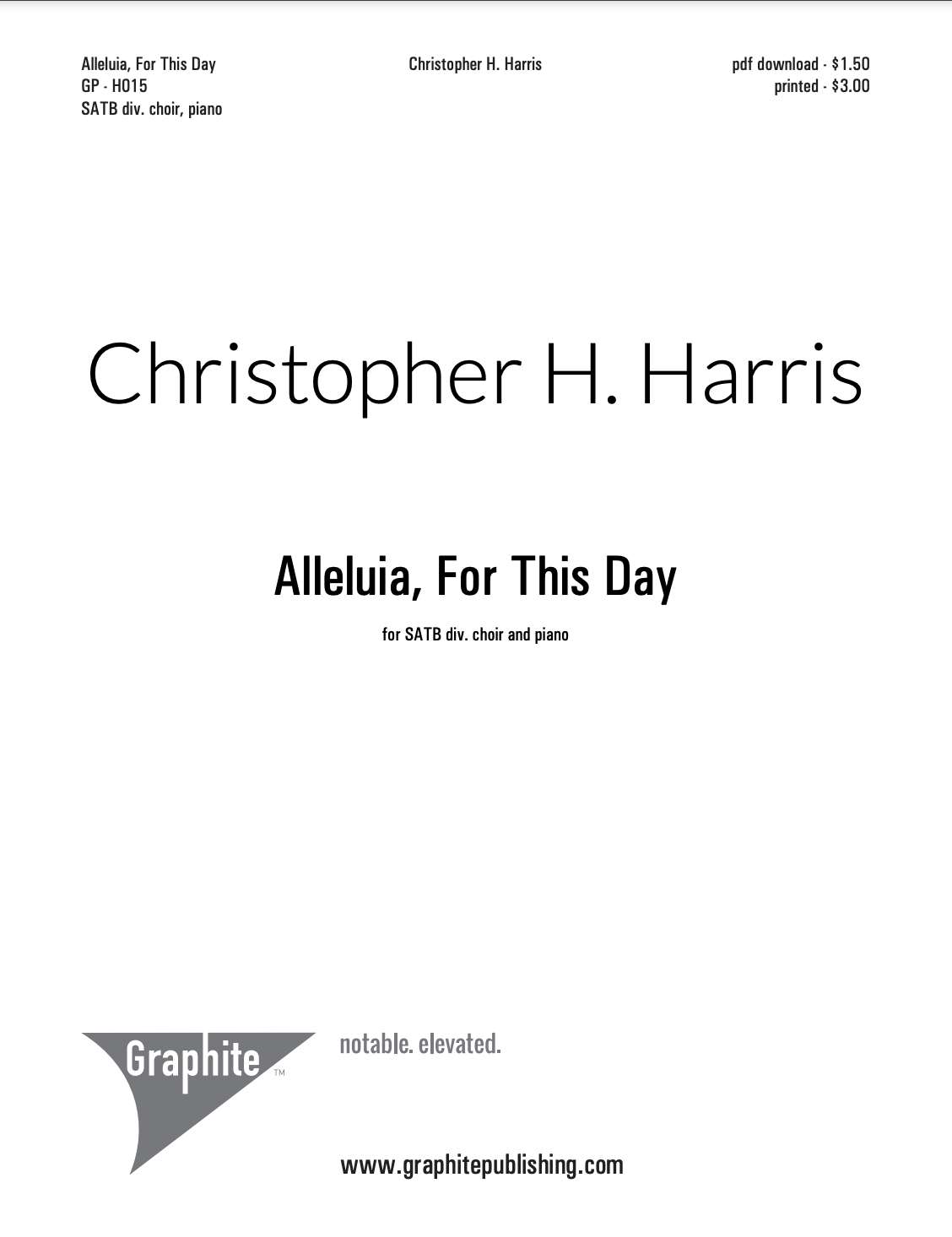 Christopher H. Harris has contributed a bold, rich, and dramatic anthem to the repertoire of SATB choral Christmas music. The arpeggiated piano figures provide both momentum and harmonic support to sustained and colorful choral parts. The piece slowly builds to an enormous, passionate climax and builds once more to serenely beautiful “alleluias.” Choirs with the depth to sing divided parts as well as long, sustained phrases would benefit from adding this to their Christmas programs. 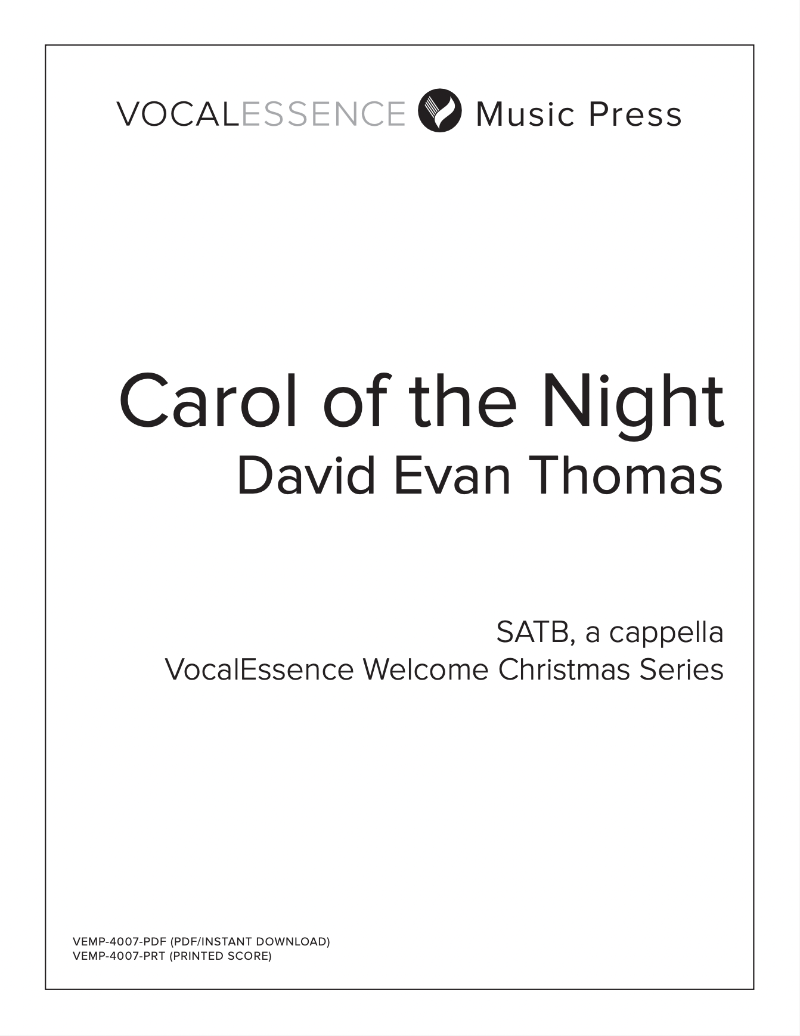 “Carol of the Night” treats an image common to all religious traditions: the kindling of light in the darkness. From a moody, wordless texture, an expressive melody leads to an affirmation of hope and lively interplay between the voices. The work was a winner of the Welcome Christmas Carol Contest in 2017.

Martha Hill Duncan received a diploma in Vocal Music in the first graduating class of the Houston High School for Performing and Visual Arts and a Bachelors of Music in Composition from the University of Texas at Austin. Her composition teachers have included Donald Grantham, Robert Palmer and Sam Dolin; her piano teachers have included Gregory Allen, Danielle Martin, Errol Haun and Trudi Borden. Her ongoing interest in vocal music and recognition of her adopted country, Canada, has culminated in a cycle of songs for voice and piano entitled Singing From the Northland: A Celebration of Canadian Poetry in Song. Three of these songs, “Severance,” “Grey Rocks and Greyer Seas” and “Rainfall” were chosen as finalists and performed in the 2005 Diana Barnhart American Song Competition in Wayne, PA. As director of the Kingston, Ontario women’s choir She Sings!, she has also produced several works for treble choir, many based on native Canadian texts, including “Song of the Stars,” “Lady Icicle” and “Lullaby of the Iroquois.” These three songs were performed on May 11, 2007 by the The New York Treble Singers in their concert entitled, American Voices. Her “Star Prayers” for SSA and Piano was a co-winner in the 2005 Ruth Watson Henderson Choral Composition Competition. Other choirs that have commissioned her work include Aurora, Melos Chamber Choir, Pro Arte Singers, and the Young Choristers Limestone. 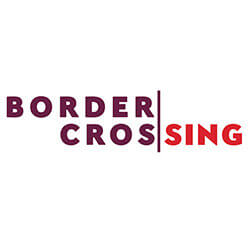 Gaspar Fernandes (1566–1629) was a Portuguese-Mexican composer and organist active in the cathedrals of Santiago de Guatemala (present-day Antigua Guatemala) and Puebla de los Ángeles, New Spain (present-day Mexico). Founded in 2017, Minnesota-based Border CrosSing envisions fundamental change in classical music culture, so that every concert, every audience, and the artists on stage truly reflect the cultural reality in which we live. Border CrosSing’s work provides opportunities for people from different communities to understand each other in new ways through Puentes, a concert series centering Latinx culture and music; Heritage Choir, an inclusive community chorus with a focus on exploring cultural heritage; educational programming; and communal singing events.

Elizabeth Alexander (b. 1962) grew up in the Carolinas and Appalachian Ohio. Her love of music, language and challenging questions is reflected in her catalog of over 100 songs and choral works, and a style which moves effortlessly between concert stage, choir loft and jam session. Her music has been performed by soloists, chamber musicians and orchestras around the world, as well as by thousands of choirs. Her acclaimed text settings of both original lyrics and the words of others prompted Choral Director Magazine to write that her “mastery of prosody and declamation results in a marriage between music and text that is dynamic and indelible.” Other reviewers have described her music as “brilliantly innovative” (New York Concert Review), “truly inspired” (Boston Intelligencer) and “stunning…exquisite…sculpting light into sound” (Kansas City Metropolis). She lives in Saint Paul, Minnesota, where she reads voraciously, makes pretty good biscuits, looks for all kinds of excuses to visit her two grown sons, and gardens during the three month period in Minnesota which is not winter.

B.E. Boykin (Brittney Boykin) is a native of Alexandria, Virginia. After graduating from Spelman College in 2011 with a B.A. in Music, Ms. Boykin continued her studies at Westminster Choir College of Rider University in Princeton, New Jersey. She continued to compose music during her time at Westminster and was awarded the R & R Young Composition Prize just a few months shy of graduating. In May of 2013, Ms. Boykin graduated from Westminster Choir College with a M.M. in Sacred Music with a concentration in choral studies. Among her professional endeavors, Ms. Boykin is currently an Assistant Professor of Music at the Georgia Institute of Technology. She recently obtained her PhD from Georgia State University with an emphasis in Music Education.

Dr. Christopher H. Harris, native of Fort Worth, Texas, is a music educator, conductor, performer, and choral composer. In August 2017 he joined the faculty at Arkansas Tech University as Director of Choral Studies and Assistant Professor of Music. He received his PhD in Choral Music Education from Florida State University in Tallahassee, FL, his Master’s in Choral Conducting from Ithaca College in Ithaca, NY, and his Bachelor’s in Music Education from Texas Southern University in Houston, TX. Prior to entering graduate school, Harris enjoyed several years of successful public school teaching in Houston, Texas. His choirs received numerous sweepstakes awards at state UIL competition as well as honors to perform with the Bay Area Chorus and an invitation to perform as a demonstration group at the Texas Choral Directors Association Convention. Harris is the founder of the Houston Master Singers and has served as the Assistant Director for the Houston Ebony Opera Guild. He is active as an adjudicator and has presented numerous sessions on choral rehearsal techniques at state and regional conventions. He is a published composer with several accolades including winner of both the Eastern and National Divisions of the 2013 National Association for Music Education Composition Competition, and the Grand Prize Winner of the 2016 Ithaca College Choral Composition Competition.

The music of David Evan Thomas has been praised for its eloquence, power and craft. A two-time McKnight Foundation Fellow, he has also received awards from the American Academy of Arts and Letters, and the American Guild of Organists. Thomas has received commissions from the Minnesota Orchestra, the Saint Paul Chamber Orchestra, The Schubert Club and the American Composers Forum. VocalEssence Music Press is a dynamic music publishing company that offers a select group of emerging composers the opportunity to make their music available to choirs everywhere. And we offer choruses access to new music they can’t find anywhere else. Our mission is to help choruses, conductors and composers connect in meaningful ways by publishing exciting new music for singers at all levels. Discover cross-cultural collaboration through the VocalEssence ¡Cantaré! Series. Mexican composers wrote these works for Minnesota school, college and community choruses to sing. Even young children can master the challenge of singing in Spanish and the indigenous languages of Mexico. Get value-added with our free Music Resource Guides that are designed for conductors, teachers and students to use to learn more about the cultural context of the compositions. VocalEssence Music Press is a subsidiary of VocalEssence, a leading arts organization based in Minneapolis, Minnesota.

Jonathan Campbell received his B.A. from Luther College in 1998, a Master of Sacred Music degree from Luther Seminary, St. Paul, Minnesota in 2002, and a Doctor of Musical Arts in choral conducting in 2015 at North Dakota State University. Jon is founder and artistic director of the Minnesota Renaissance Choir, and is currently Director of Music at Zion Lutheran Church, Anoka, Minnesota. His compositions are available from leading publishers.