“Lots of colors appear when you’re working with other people.” Jean Stapleton

Throughout the month of October, we’re revisiting some of the staple issues of Choral Ethics. I’ve written a BUNCH about each of these subjects during the last few years. While most of us now rehearse and perform in a much different way, these issues remain at the center of Choral Ethics even now. Today we will speak of Collaboration.

I am the daughter of a ballet dancer/stage director father and an opera singer mother; thinking about collaboration between arts is normal to me. Yet, when I bring up the idea of collaboration between arts, I often get blank stares or an occasional “no way” from those I thought would be open to doing something new. We choral folk could learn much from our fellow artists (whatever their discipline) in a coming together of arts, but may tend to think it is not an option for our ensembles or think it might draw attention away from our music making.

One of my favorite works for solo piano is a suite by Modest Mussorgsky, Pictures at an Exhibition. Orchestrated by Maurice Ravel among others, the work was a memorial of sorts for Mussorgsky’s artist friend, Victor Hartmann, who died at the age of 39. As Mussorgsky walked through a memorial exhibit of 400 of his friend’s works, he was inspired to write a piece reflecting what he saw. It delights me to think two artistic forms—musical and visual–converged to create such a lovely work. And I wonder why we don’t “converge” more.

Other musical and performing art forms already know what we should; using art and artists to enhance takes nothing away from our own performance. This may seem like a new idea but it’s not. Early in the 20th century, Pablo Picasso collaborated with Diaghiliev and the Ballets Russes on several ballets, using his Cubist sets and costumes for Parade, The Three-Cornered Hat and Pulcinella. In the last 25 years, opera companies around the country have used sets and costumes influenced by the Belgian surrealist, Rene Magritte, for productions of Rossini’s The Barber of Seville. Having attended two productions of this version of the opera, I can attest it is charming!

All this is great, you think, but how does this apply to choral ensembles? A few years ago, my husband gave me a video of two of my favorite things—a ballet choreographed on my all-time favorite choral piece (to sing or conduct), Stravinsky’s Symphony of Psalms. Originally conceived for Nederlands Dans Theater in 1978, the chorography has been used by other dance companies, recently by the Boston Ballet. It was profound to see what I was hearing and singing and actually seemed to make my experience fuller. I don’t know if other large choral works would work quite as well having a ballet made on them, but I think Symphony of Psalms does.

I also try to collaborate or be inspired by other art forms with my own ensembles.  A few years ago, my chamber choir did a concert inspired by the life of the architect, Frank Lloyd Wright.  My singers, to a person, told me how much they enjoyed the music and how much fun they had with this perspective, different from our usual. Once we are able to have regular concerts again, we plan on being inspired by our new venue’s beautiful stained-glass windows and “Be Thou My Vision,” will be one of the first live concerts we will give.

Collaboration doesn’t have to be difficult; it could be as simple as having a concert at an art gallery or museum. There are occasionally announcements of concerts here on ChoralNet of events such as these, with musical offerings intended to enhance the art works or exhibits.

Once we are able to come together and make music together, it makes sense to work with other artists in new ways. We can enhance each other’s art and enrich our lives as well. 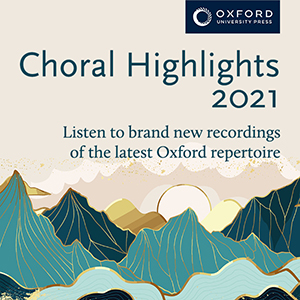 On This Day
November 30

“The Decision,” an opera by Thea Musgrave, opened in London at Sadler’s Wells on this day in 1967.