I agree with the criticism about the “award-bearing” adolescent world we live in today. Every student gets a trophy. Students get participation awards just for breathing.

Does Every Student Deserve An Award?

The answer isn’t as cut and dry as you might think….. 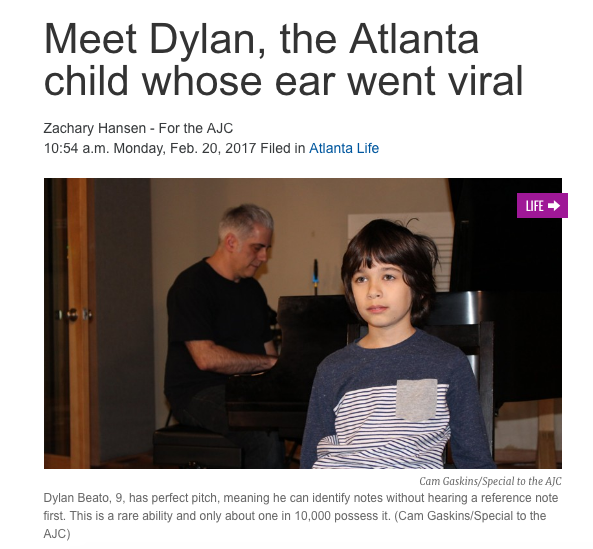 What is your experience with Perfect Pitch?
On Monday morning, I was on the treadmill running, and I came across this article about a child in Atlanta who has perfect pitch.
I’ve always believed that perfect pitch was far more rare than some of us believe.
Maybe it’s because mine isn’t perfect!  🙂
I certainly appreciate the information that expert researchers in our field contribute to our work, but doing it is not a passion for me.
So, today, I am asking for data from YOU based on your experience!
Here is mine!
Click here to read the rest! Think for a moment about a time when you felt at peace during a performance. Do you remember the piece? Were you in the audience or were you a part of the performance? Could you begin to feel a weightless energy in the room as you listened? Perhaps you can’t articulate exactly what caused this welling up of calm and restfulness within you, but you were aware of the quietness in that instant. For at least one moment, you dropped everything else ­ the stress from work or school, the election, the news ­and just listened to a beautiful piece of music.

It might be difficult for those of us outside the choral community to understand why some of us dedicate our lives and work to constantly seeking moments of serenity and peace in the music we create. And in times of recent violence, unrest, and cross­-cultural turmoil to feel a sense of responsibility to share our music with as many of those who would listen, and to renew our mission as music­-makers to that of the peace­-maker.

To do just that, the international choral community is excited to present AVoice4Peace, a world-­wide peace awareness project with choirs playing a starring role in pursuit of peace­-making. The ultimate goal of this project is to have choirs and musicians from all over the world begin talking and singing about music as a catalyst for peace, and more specifically how choirs can be a part of this mission.

September 21st is recognized as the International Day of Peace by the United Nations General Assembly. All over the world people practice nonviolence and ceasefire on this remarkably significant day. AVoice4Peace and all of its participants will celebrate September 21, 2016 (and each year thereafter) by hosting a world-wide peace concert in Nairobi, Kenya.

For those of us at home, anyone with a smartphone or camera can record themselves singing the repertoire. Visit AVoice4Peace.org, for more information about hosting your own recording event. Spearheading the project are Ken Wakia, director of the Nairobi Chamber Chorus and Dr. Kevin Fenton, director of the Festival Singers of Florida and choral faculty at Florida State University.

AVoice4Peace began as a result of the collaborations between their two choirs. ‘Ukuthula’, a traditional African peace hymn, brought the two choirs together in an immediate and exceptionally sincere way. As the two choirs rehearsed together, performed together, and eventually hosted one other other in their own nations, a dialogue about international peace began. In front of an audience following one of their concerts, Ken Wakia spoke directly to the crowd, and dared them to imagine a world wherein singers from all over could achieve the unity that they had shared. And like that, AVoice4Peace began.

“Any piece of music that talks about unity is really needed right now,” says Fenton. “Choirs are a community; that is the way they function. And maybe if choirs all over the world sing ‘Ukuthula’ and they think about ‘Ukuthula’, it could really make a lasting difference.” Since Ukuthula had such an enduring impact on both the Nairobi Chamber Chorus and the Festival Singers of Florida, the piece has become the focal point of the project, and will be the song that choirs all over the world will record themselves singing. Once recorded, choirs can submit their videos to AVoice4Peace, where all submissions will be edited together into a ‘virtual choir’, painting a picture of what a peaceful world could look like. It will be shared with the international choral community and will keep conversations alive, and be a starting place for future singing activities that will pave the way toward helping individuals achieve a peaceful mindset.

In addition to the peace concert and the interactive participation from international choirs, the project is also the focus of an upcoming documentary film of the same name. Bud Simpson, a filmmaker and faculty member at Florida State University was a previous student of Fenton’s and is directing the film. “The film will be a sort of legacy piece, and will give voice to the stories and songs of several musicians participating in the first­ ever AVoice4Peace Concert held in Nairobi,” says Simpson.

“Through the eyes of our characters, we’ll learn about the importance of international and intercultural musical collaboration, as well as the powerful effect that music has on listeners (and performers) when used as a catalyst for peace.” Simpson and his team are currently raising money to cover production costs for the film.

You can read more about this effort on their Kickstarter fundraising page HERE:

1. Register to host a recording event

We often seek permission and approval from others in order to live the life we wish to live, both personally and professionally. The problem is that when we do this we give up control of our lives to everyone else but ourselves. Since we love what we do so much, there is a very blurry line between our personal and professional lives. This presents a huge problem. If we’re always looking for other’s permission and approval professionally, then we will never truly be ourselves personally.

In this week’s Technique Tuesday entitled “Cut the cheese“, I lead you through a process and give you permission to choose music that you and your choir will feel great about. It’s a short one! ~15 mins
LISTEN HERE

On the regular interview episode entitled “Choral Entrepreneurship“, I had the privilege of interviewing Patrick Dupree Quigley, conductor of Seraphic Fire, undisputedly one of America’s best professional choirs. He speaks about giving himself permission to make that scary leap from a safe job into full-time entrepreneurship. Patrick describes what it was like to build Seraphic Fire to the $1.6 million/year budget powerhouse that it is today. ~50 mins
LISTEN HERE

Kyle Karum is an expert music ed interviewee and shares his tips on creating a compelling cover letter, resume, and portfolio that your potential employers will love!

LISTEN TO THE EPISODE HERE!

Kyle Karum is a music educator originally from Muskegon, MI where he graduated from Mona Shores High School in 2006. He then attended Western Michigan University for his studies in music education. While at WMU, Kyle studied conducting under Dr. James Bass, Dr. Ronald Oliver, and Dr. Kimberly Dunn Adams as well as music education with Dr. Dee Gauthier. He graduated in 2012 with his Bachelor’s of Music: Music Education (Choral/General Emphasis).

Kyle recently held the position of Director of Choral Music and General Music Teacher at Prairie Heights Community School Corporation in LaGrange, IN where he taught two general music classes and five choir classes. In addition, he also taught Music Theory/Composition and Music History/Appreciation as well as acted as the Assistant Director/Conductor of the Theater Department.

Kyle is currently the Director of Choral Music at Seymour High School in Seymour,IN where he teaches over 200 students in five choir classes. Under his direction, the four choral ensembles at SHS attended the ISSMA District Choral Festival on 2016. There each ensemble was awarded a Gold rating in not only performance, but also sight-reading. As a part of his appointment, Kyle is also responsible for directing the spring musical each year.

Kyle continues to sing with the Bloomington Chamber Singers in Bloomington, IN.

RELEVANT LINKS MENTIONED IN THE INTERVIEW

On This Day
March 3

U. S. composer and pianist Margaret Bonds was born on this day in 1913.