Grants are $15,000 -$50,000 and include participation in a peer-learning cohort. More information here: https://chorusamerica.org/music-ed-grants

If you have already started an application, visit the Chorus America Application Portal to complete and submit your application. Do not fret if you are considering applying but have not yet started. There is still time to complete an application! The deadline to apply is January 28, 2022, at 8 pm ET.

We understand that grant applications can often be burdensome, so we have designed a five-question application and transparent guidelines in an effort to make the process as simple as possible. Access the many resources from our Partnership Grants website for support as you complete your application.

Vox Grata Women’s Choir is now auditioning sopranos and altos for its tenth anniversary concerts to take place in May 2022. Auditions are by appointment now through February 3rd. Rehearsals are on Mondays from 7:00-9:00 p.m. at Westminster Presbyterian Church, 3900 West End Avenue, Nashville. Rehearsals for the 10th anniversary concerts will begin on Monday, February 7.

For information about the audition process or to request an audition, please submit an audition request form directly from our website (https://voxgrata.com/audition/) or email us at .

All singers are fully vaccinated against COVID-19, and we are rehearsing with medical-grade masks in a socially distanced format. We rehearse in two large, well-ventilated spaces each week, changing locations midway through each rehearsal. With these protocols, we have safely enjoyed the gift of shared song since October 2021.

Vox Grata was founded by Artistic Director, Jeanette MacCallum in 2012. The choir is comprised of joyful women who, out of gratitude for the fullness of their own lives, possess a desire to sing together for the benefit of others. The group performs repertoire that expresses a uniquely feminine spirit, especially works that promote the best interests of women in society. All concert programs directly benefit the needs of women in the Nashville area.

This call for scores by the University Chorale at the University of North Carolina at Greensboro specifically seeks to amplify the voices and compositions of composers who identify as Indigenous, Native peoples of the Americas, and/or First Nations, and write in any compositional style for voices. Works which encourage the embodiment of story, narrative, and improvisation will be given special priority, as will works in indigenous languages.

Submission criteria for the call

Composers must identify as Indigenous, First Nations, and/or Native peoples

Composition must be 4-6 minutes in length

Pieces with texts in native languages should include a pronunciation guide (either written or recorded) and will be given special consideration. We are particularly interested in compositions which include elements of storytelling and narrative.

Other information: Rights to texts must be cleared, and evidence of copyright holder’s permission must be shown. Composer will retain the copyright of the piece. UNCG University Chorale will reserve the right to the world premiere of the piece. For payment processing, composers must be citizens of the United States or Canada.

Submissions are due via this form on March 1, 2022. A small committee of members from the University Chorale will review the works and assist in choosing finalists. Finalists will be notified by March 8, 2022 and winners by March 15, 2022. The performance of the chosen works will occur on April 24, 2022 at 5:00pm as part of the University Chorale concert at First Presbyterian Church, Greensboro, NC.

Whatever your new year will be, singers need to remain active. Art songs provide an opportunity for a single voice to either perform with a collaborative pianist, or to create a relatively simple, virtual performance. Either way, Graphite has a wide variety of art songs useful to the soloist, student, or voice teacher. 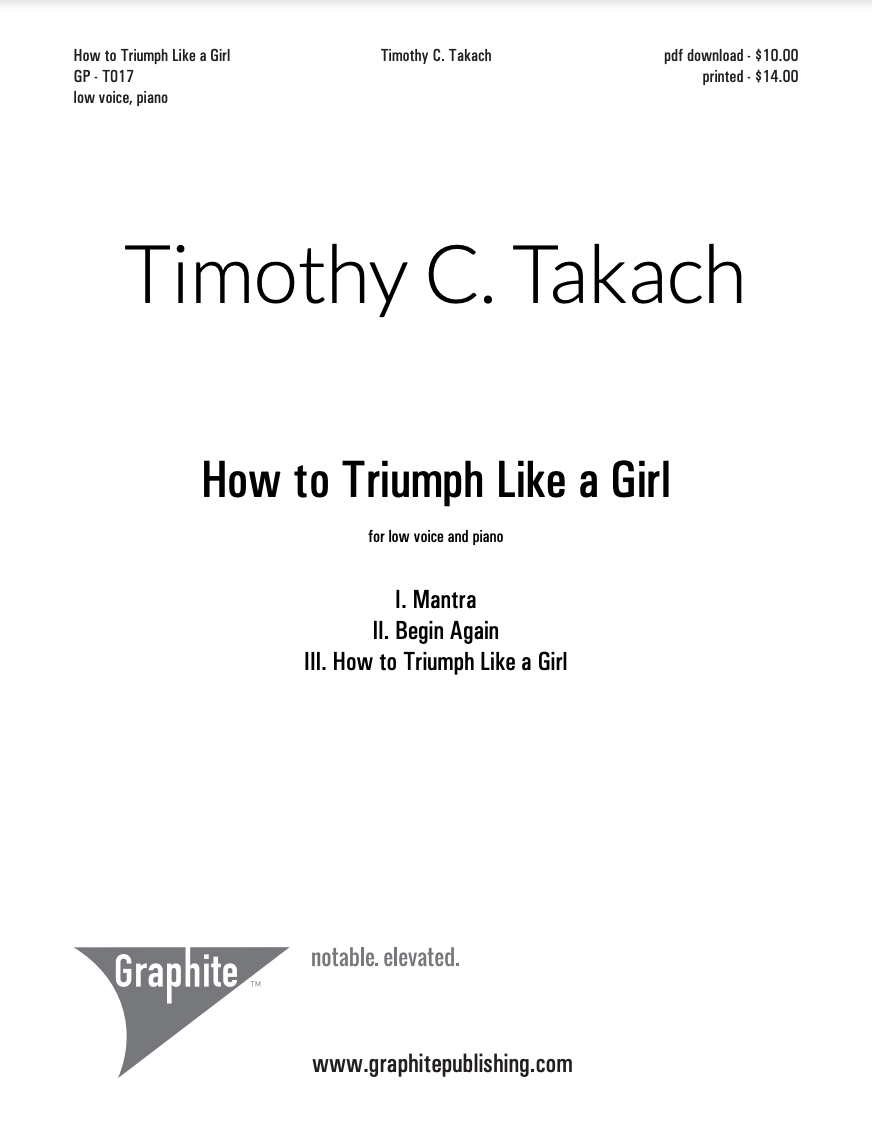 Timothy C. Takach’s “Mantra,” from his cycle “How to Triumph Like a Girl,” is unusual for its contemporary text as well as portions of audience participation. The humorous poem engages the audience with texts such as, “…actually exercise, instead of just Googling it.” Several call and response passages make the song a communal experience. “Mantra” forges a deep connection between poet, singer, pianist, and audience. 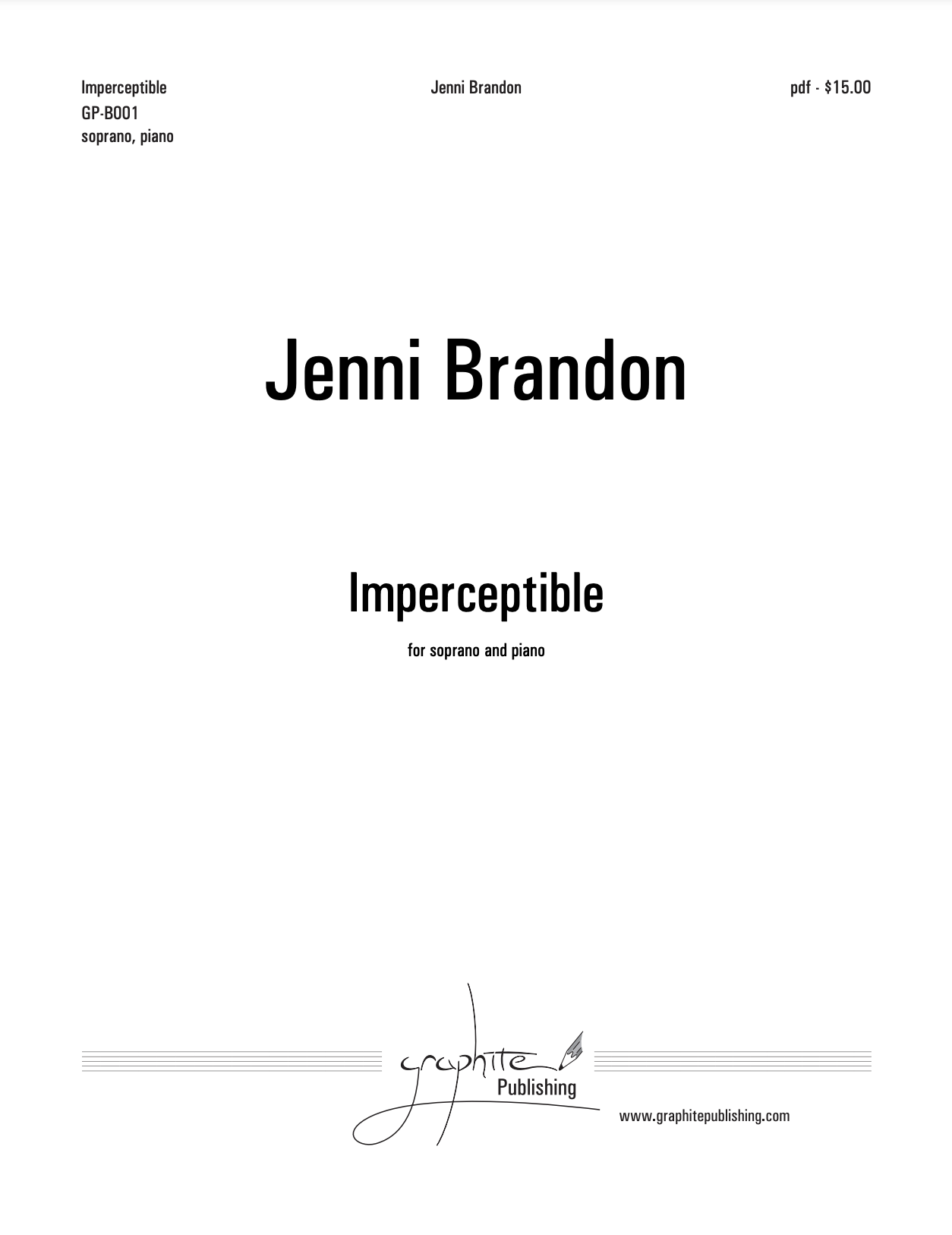 Jenni Brandon’s ten-minute song cycle “Imperceptible” is an exotic window into the mysteries of love and loss seen through the lens of Japanese poetry translated into English. Brandon incorporates some extended musical effects, such as singing into sustained piano strings. “Imperceptible” offers moments of eerie silence, haunting sounds, and intense drama. 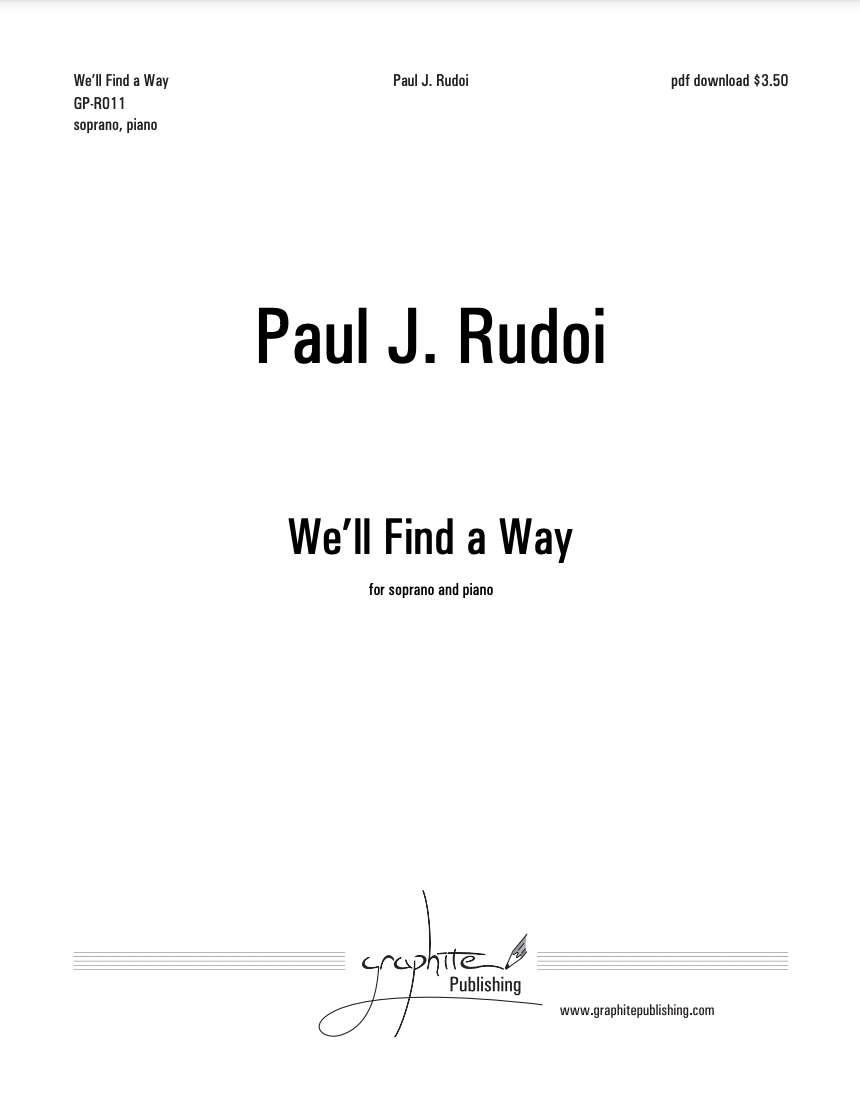 In “We’ll Find a Way,” Paul John Rudoi has crafted a more experimental song with elements of aleatoric rhythm and a chant-like melody. A pedal point—played with the right hand—contrasts with the left, which fills in the harmony. It’s a clever musical construction that draws attention to the text and the message of love and hope. Available for soprano or alto or tenor. 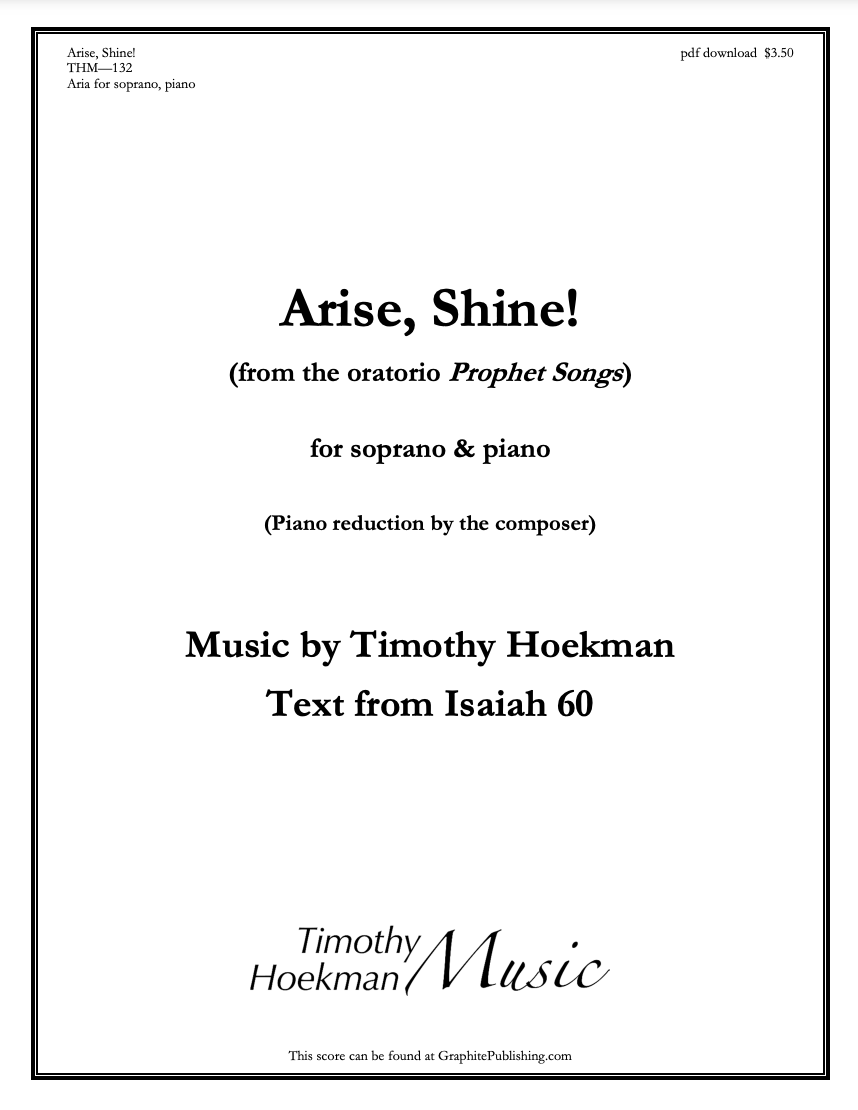 “Arise, Shine,” an aria extracted from Timothy Hoekman’s oratorio “Prophet Songs,” is appropriate for the concert stage, or for a liturgical service. A tour de force for soprano, “Arise, Shine” could be paired with a variety of Baroque arias. Clear, consonant harmonies and passages of coloratura evoke “Rejoice Greatly” from “Messiah,” or even arias by Mozart. High notes are prepared well, and Hoekman understands where the best colors of the voice lie. 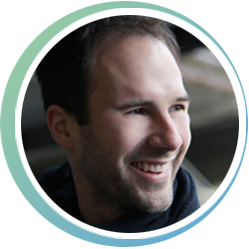 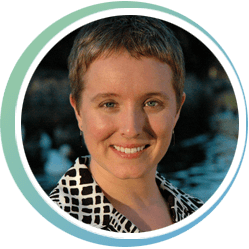 Jenni Brandon (b. 1977) is a composer of solo, vocal, choral, chamber, and orchestral music. Her music has been described as “some of the most imaginative, ingratiating recent chamber music for winds” (Steve Turpin, Morning Musicale, WBST), and her style is often influenced by nature and her surroundings. Ensembles and organizations that have commissioned, performed, or broadcast her work in venues across the world, including Carnegie Hall, include Voices of Ascension, The Singers-Minnesota Choral Artists, the Yale Glee Club, Conundrum, Sistrum, the Definiens Project, Sister Singers Network, California Association of Professional Music Teachers, and the Young New Yorkers Chorus. As a resident composer, she has worked with the Vientos Trio in Los Angeles and is in demand as a guest composer. 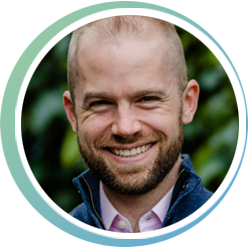 Paul John Rudoi is an award-winning composer, conductor, tenor vocalist, and arts entrepreneur. Deemed “indisputably unique, confident, and innovative” through the American Prize, Paul’s award-winning compositions have been commissioned and performed by various ensembles and artists throughout North America and Europe. Garnering grants and support from the Jerome Foundation, the ACF, MRAC, MSAB, the NEA, and ASCAP, his music is published through PJR Music alongside Graphite, Santa Barbara, Walton, Morningstar, and ECS music publishers. Paul holds degrees from The Hartt School and the University of Oregon, and his teachers have included Sharon Paul, Craig Phillips, Robert Kyr, Libby Larsen, and Edward Bolkovac. 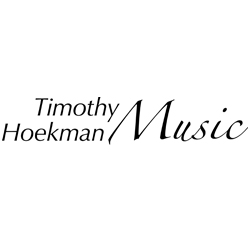 Composer Timothy Hoekman has written in many genres, but most of his works include the voice. His works have been published by Theodore Presser, Colla Voce, Plymouth Music Company, Recital Publications, and Classical Vocal Reprints. He was named the 2002 MTNA-Shepherd Distinguished Composer of the Year for his song cycle To Make a Prairie, commissioned by the South Dakota Music Teachers Association. Other commissions have come from the Rawlins Piano Trio, the Coastal Carolina Chamber Music Festival, Georgia Southern University, and First Presbyterian Church of Tallahassee, among others. His works have been recorded for Albany Records, Azica Records, and Mark Records.

As always, it is a great joy to announce this quarter’s marvelous new compositions accepted into the PROJECT : ENCORE Catalog of Contemporary Choral Music:

We offer a particularly warm welcome to Steven Paxton, who is new to the PROJECT : ENCORE catalog!

Each of these selections has been blind-vetted by at least three of the prominent conductors who serve in our pool of reviewers.An average of just over half of all post-premiere compositions submitted are accepted into the P:E Catalog. Congratulations, all!

CONDUCTORS are urged to sign up to receive the quarterly report, for regular updates on new repertoire! projectencore.org

COMPOSERS are urged to submit compositions that have been premiered, but have not been extensively performed beyond the premiere–as frequently as one per quarter–for review and possible upload into the prestigious PROJECT : ENCORE database at projectencore.org

On This Day
January 29

Wolfgang Amadeus Mozart's opera seria "Idomoeneo" was premiered on this day at the Cuvilliés Theatre in Munich under the composer's musical direction.