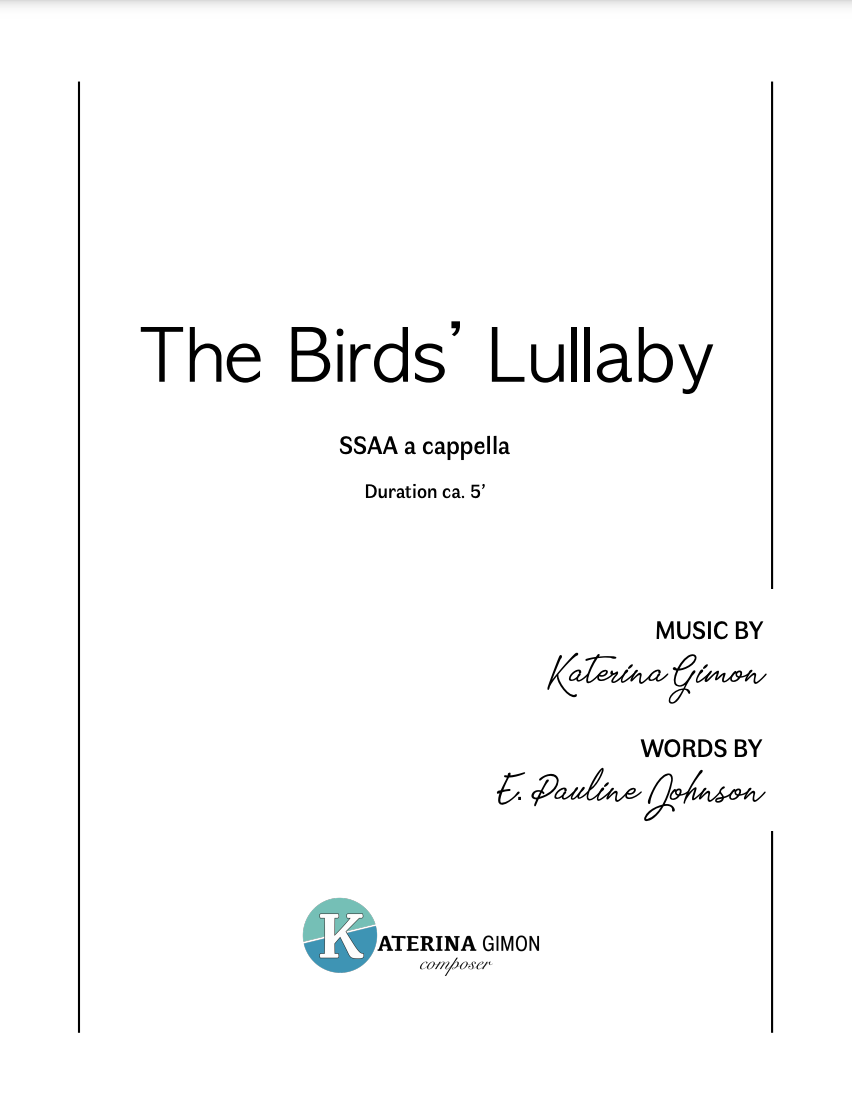 Katerina Gimon’s music is filled with evocative colors and extended choral techniques that are both effective and accessible. Artful drawings and graphic representations of sound provide motivating portals into her musical ideas. Despite the innovative notation, Gimon’s music is readily accessible. She says, “graphic elements with images give a sense of what I want from singers. It provides something extra, a form of inspiration. Anything I write is achievable by someone with a voice box.”

“The Bird’s Lullaby,” SSAA, makes extensive use of graphic notation, aleatoric techniques, and beautiful iconography. Gimon’s drawings and graphics are authentic and purposeful. They inform the singer and provide a stunning example of modern augenmusik. Although the audience cannot see the score, they can hear the results.

Hailed as a “new music maverick” (Vancouver Symphony Orchestra) and “one of the most exciting young vocal composers in Canada” (ArtsFile); Katerina Gimon’s uniquely dynamic, poignant, and eclectic compositional style is rapidly gaining her a reputation as one of the most distinctive emerging voices in contemporary Canadian composition and beyond. Her music has been described as “sheer radiance” (Campbell River Mirror), “imbued…with human emotion” (San Diego Story), and capable of taking listeners on a “fascinating journey of textural discovery” (Ludwig Van), earning her a place on the Canadian Broadcasting Company’s 2017 listing of Canada’s ‘hot 30 classical musicians under 30’.

Katerina’s music draws inspiration from myriad of influences — from the Ukrainian folk music of her heritage to indie rock, as well as from her roots as a songwriter. Her works have been performed across North America, Europe, Asia, and Oceania at prominent events such as ACDA Conferences, Choral Canada’s Podium Conferences, Let the Peoples Sing Euroradio Choral Competition Finals, as well as at renowned venues such as Carnegie Hall, Orpheum Theatre, and the Hong Kong Cultural Centre. Recent commissions include new music for the Vancouver Symphony Orchestra, the University of Montana, re:Naissance Opera, Chor Leoni, the Vancouver Island Symphony Orchestra, and the Minnesota Youth Chorale.

She is currently the composer-in-residence for Myriad women’s vocal ensemble and a founding member (composer, voice, electronics) of new music & AR/VR collective Chroma Mixed Media, which endeavours to explore new avenues and intersections for artistic expression by combining various art forms and new technologies. She currently lives and works in Vancouver, British Columbia, Canada on the unceded territories of the Coast Salish peoples (the Squamish, Tsleil-Waututh, and Musqueam Nations).
www.katerinagimon.com

Austro-Bohemian composer and conductor Gustav Mahler was born on this day in 1860.