“To a philosopher all news, as it is called, is gossip, and they who edit and read it are old women over their tea.” Henry David Thoreau

Throughout the month of October, I’d like to revisit some of the staple issues of Choral Ethics. I’ve written a BUNCH about each of these subjects during the last few years. While most of us are now rehearsing and performing in a much different way, these issues remain at the center of Choral Ethics even now. We begin today with Gossip.

Recently, believe it or not, I’ve gotten quite a few emails about gossip, despite our altered reality. It seems the gossip and rumor mills having running overtime about music programs and community choruses across the country. Most of the gossip centers on how groups are coping or if they are following state-mandated guidelines. The “perfect” Zoom rehearsal and parking lot performances are new status symbols by which to judge our peers. Choral organizations who are not able to do anything approaching other groups solutions are gossiped about. And there are unpleasant wonderings about certain choral organizations ability to survive if they are not able to rehearse or perform anytime soon. Following mandates–or not–is a subject for some of the nastiest gossip according to my correspondents. In my opinion, this is all a bit distasteful in the middle of a Pandemic.

I’ve told my correspondents to ignore the gossip if it is about them and their groups, and not join in if it isn’t. Simple solutions because who has the TIME or the emotional strength and energy to deal with it?

It does no good to gossip about our colleagues and their ensembles.  It doesn’t help the arts community in general or the choral community specifically to “bad mouth” others. We are all in this together and the sooner we realize it and behave accordingly, the sooner we will reap the benefits.

We need to be supportive of each other, since if your group is doing well, my group should be as well. Many forget this truth. They attend concerts and gossip about the performance or the concert wear or who is doing what and how well WHILE THE CONCERT IS HAPPENING. They repeat gossip they hear to their friends and the truth, whatever it is, morphs into something unrecognizable, the victim of a game of “Telephone.” It might be “fun”, but it is damaging because it destroys good will. And art organizations, no matter if they are at the church, school, or community level, need good will to survive.

I hate the gossip which surrounds some art organizations. I won’t tolerate gossip in my own rehearsals from singers about other groups, especially if they are former members of those other groups.  You won’t hear a bad word from me about my conducting colleagues or their choirs in public or private, but my spouse and children know my opinions.  I will nod or be non-committal when gossip swirls around me, but I won’t join in the “fun” no matter what. I know when the gossip is directed at me in my presence and I refuse to acknowledge it, I look stupid or naïve. If I say anything in retaliation or make an equally nasty comment, I will be sinking to their level.  And I will look as poorly as they do.  Better to be thought stupid than nasty!

There is a difference between networking and gossip.  If someone retires and there is an open position, it’s good to know. It’s also good to hear why the person is leaving so we can decide if we really want to apply. Whoever applies for the first job and then gets it will create another opening.  And so on, down the food chain of choral jobs. We’ve all heard stories about colleagues in our community: the “too big for his britches” fellow who got the plum church job and was asked to leave after eight months or the college conductor who retired and left a mess for his successor to clean up or the community chorus director who didn’t try to be a community member.  I never believe such stories unless I hear it from a person I respect.  I believe the church member/piano professor who was the one to let the church director go or the college conductor’s replacement. The alto with an attitude I don’t believe when she tells me the director was asked to leave for the simple reason, he didn’t attend the fund raiser!  I don’t repeat these stories to anyone because I don’t want to perpetuate gossip.  It’s not fair to my colleagues and I don’t want to get that reputation.

Until next week, be well and safe. 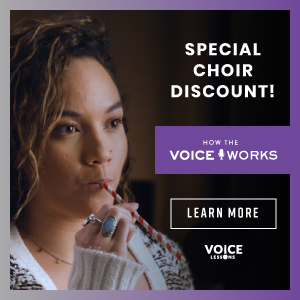