Emptiness at the Heart of Music

So often when we speak or write about music – when we practice, when we listen or perform – the focus of our attention is on the notes being played or sung. These notes, their pitches and rhythmic accuracy, the articulation and tone with which they are produced, how fast or slow they come one after another, how they blend with those being played or sung by others if we are making music in an ensemble: these notes and the attention we pay to them form the basis of so much of our work as musicians.

Yet there is another element to music making that is just as essential as the notes: silence. Silence is there before the music begins and continues after it ends. Silence punctuates the spaces between the notes and exists even as the notes are sounding, buoying the notes up like foam on the crests of waves on the surface of the ocean. Silence isn’t just the absence of sound. It is what gives music perspective and depth, and the power to penetrate deep into the psyche of the listener.

Without silence, there is no music.

In conventional music notation, notes are what we call the symbols which represent sounds, and silences are called rests. I dislike this term rest, as it implies that the silence notated is merely a pause in the music (the German term for rest is actually pause), an absence of sound, a “not-notes”.

In fact, silences in music can and should be dynamic and filled with intention.

The great jazz trumpeter, composer, bandleader, and cultural icon Miles Davis was well known for the dramatic use of silence in his trumpet solos – an economy of means, or a sense of “less is more” is a hallmark of his very individual style.

A famous example of this is in his solo on Shhh/Peaceful, the “A side” of his celebrated 1969 album In a Silent Way. Miles lets the band get things going – riffing over an ostinato groove for almost two minutes – before he even begins to play. He slowly builds his solo from brief melodic fragments, separated by “rests” in which the contributions of the other members of the band punch through, rising and falling in the texture. This use of rests between the notes to strengthen the impact of each melodic statement, to impart more “meaning” with the use of fewer sounds, is one important way that musicians have creatively used silence as an integral part of music-making.

But this is not exactly what I am trying to get at. Even when Miles isn’t playing, there is still a lot of going on – many other “notes” being played by the other members of the band.

The American avant-garde composer, theorist, writer, and father of indeterminism  John Cage (1912-1992) is famous (or infamous) for his obsession with silence and his use of it as epitomized in his most renowned composition 4’33”.

A performance of 4’33” consists of the performer(s) not playing their instruments for the duration of the piece, which is divided into three movements. The piece has been performed and recorded many times and by a wide variety of performers since its premiere in 1952, including Frank Zappa, the BBC Symphony Orchestra, the death-metal band Dead Territory, and countless college music students. Although some understand the work as 4’33” of silence, in fact it is about how context frames performance, and a challenge to the definition of music.

Is there such a thing as silence?
Even if I get away from people, do I still have to listen to something?
Say I’m off in the woods, do I have to listen to a stream babbling?
Is there always something to hear, never any peace and quiet?

Cage is quoted many times and in many ways as stating that “there will never be silence” or “there’s no such thing as silence” but I believe this is only true as far as there being an unblemished, pure silence one can actually experience.

Deeply influenced by the same Zen Buddhist tradition that would influence John Cage more than 700 years later, the Meiân Ryû school of shakuhachi (Japanese end-blown bamboo flute) created a repertoire of pieces that were used as meditation practice by the komûsô – wandering, mendicant monks of the Fuke-Shū school of Zen Buddhism. 虚無僧 Komûsô means “priest of nothingness” or “monk of emptiness”. Zen expounds the concept of Emptiness as the true nature of reality, and uses many metaphors to point to this reality, as emptiness itself is inexpressible. 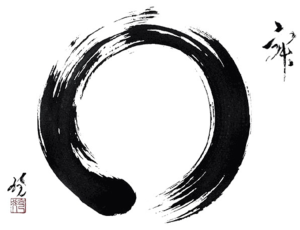 The ancient masterpiece Kokû (Empty Sky) is just such a metaphor. According to legend, Kaiso Kichiku, the founding monk of the Meianji Temple in Kyoto heard Kokû in a dream on the top of Mount Asama. “Empty Sky” evokes the void, the emptiness into which all that exists appears and ultimately disappears: Silence.

We join spokes together in a wheel,
but it is the center hole
that makes the wagon move.

We shape clay into a pot,
but it is the emptiness inside
that holds whatever we want.

We hammer wood for a house,
but it is the inner space
that makes it livable.

We work with being,
but non-being is what we use.

Claudio Abbado conducts the Lucerne Festival Orchestra in a performance of Gustav Mahler’s Symphony No. 3, August 19, 2007. The final movement ends at 1:35:57 and the silence that follows the performance lasts until 1:36:19 ~ 22 seconds

After the performance of a long symphonic work, it is customary for the conductor to continue to hold his hands in the air for a period of silence. During this silence, the music “vibrates in the memory” as Shelley wrote – finally dying away in the mind’s ear and bringing the performance to an end, at which point the conductor will finally drop his hands to his sides. This brief, final period of silence – often lasting from ten seconds up to half a minute at some concerts I have attended – can be the most moving moment in the entire performance.

I have actually heard some musicians say that the length of time a conductor can maintain this silence is a mark of how great the conductor is, but I have experienced concerts where conductors keep their hands up so long that the silence becomes forced and imbued with a feeling of impatience. A great conductor will not have to enforce silence after a performance, but will simply know when the performance is over, and relax at the right moment.

We work with music, but silence is what we use.

Login with your Social ID

Igor Stravinsky’s opera-oratorio “Oedipus rex” was first performed at the Théâtre Sarah Bernhardt in Paris on this day in 1927.